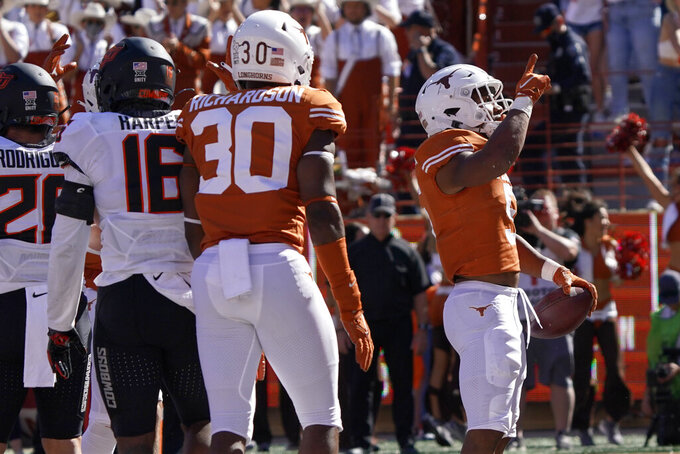 Texas running back Bijan Robinson (5) celebrates his touchdown run against Oklahoma State during the first half of an NCAA college football game in Austin, Texas, Saturday, Oct. 16, 2021. (AP Photo/Chuck Burton)

AUSTIN, Texas (AP) — Facing a big early deficit on the road at Texas, Oklahoma State leaned on the two things that had kept the Cowboys undefeated so far: defense and a punishing run game that could grind out the final quarter.

Tanner Brown's fourth field goal of the game gave the No. 12 Cowboys their first lead in the fourth quarter, and quarterback Spencer Sanders’ scrambling 10-yard touchdown run with 2:18 to play sealed a 32-24 victory as No. 25 Texas collapsed for the second consecutive game.

"We talk a lot about no fear, no frustration, no fatigue,” Oklahoma State coach Mike Gundy said.

Texas built leads of 17-3 and 24-13 behind three touchdowns from Bijan Robinson before the Cowboys' defense started dominating the line of scrimmage and tailback Jaylen Warren began smashing the Longhorns for huge gains.

The Cowboys allowed Texas just 317 total yards. Warren finished with 193 yards rushing on 33 carries, pounding out 154 yards in the second half rally.

Texas still had time to possibly retake the lead, but the Cowboys defense stuffed the Longhorns on fourth down at the Texas 42. Sanders scored two plays later and Oklahoma State then sealed the victory with Tanner McAlister’s interception with 1:57 to play.

Robinson led Texas with 135 yards on 21 carries, his fifth consecutive 100-yard game and sixth this season.

“This is two weeks in a row where we’re just trying to hold as opposed to attacking,” first-year Texas coach Steve Sarkisian said. “I think that we do that, just hoping the other team might make a mistake. Oklahoma State didn’t make a mistake. They just kept playing their game.”

Texas' Robinson is getting the hype and the Heisman Trophy mentions. Warren, a transfer from Utah State, is making a case as the Big 12's top newcomer. Warren is averaging 32 carries and 164.8 yards over the past four games since being made the Cowboys' feature running back.

Oklahoma State: Sanders had three key turnovers in a loss to Texas last year but kept the big mistakes to a minimum and was steady late. He was 19 of 32 for 178 yards with only one turnover. Even that one didn’t hurt as Taylor’s interception returned the favor and kept Texas from pulling away.

“I didn't play too good, but I didn't hang my head,” Sanders said. “The second half we overcame adversity. I'm proud of our guys.”

Texas: The Longhorns were pushed around at the line of scrimmage on both sides of the ball for the second week in a row. The offensive line, which was reshuffled this week because of injuries, allowed three sacks and Robinson had nowhere to run in the second half as Texas ended the game with 12 yards on its last six drives.

“I thought our defense held on probably about as long as they could,” Sarkisian said. “You can’t go three-and-out four times in a row and expect those guys to just keep holding on. Ultimately, the dam broke.”

The Cowboys' rise to No. 12 was as much due to the jumble of losses in front of them in an unpredictable season. But a big comeback on the road with stout defense and running will earn new respect and should keep their rising toward the Top 10. Texas started the season ranked No. 21, but after three losses may not be ranked again for a while.

Texas quarterback Casey Thompson had his worst outing since taking over the starting job in the third game. Under steady pressure, he had his first multiple turnover game and his first interception was easy pickings for Taylor's touchdown. Thompson finished 15 of 27 for 179 yards and completed only one pass of more than 5 yards in the second half.

Texas linebacker DeMarvion Overshown, the Longhorns' leading tackler, didn't play after a first half concussion. He went straight to the locker room and was in street clothes for the second half.