No. 12 Oregon rides 4-game win streak into game vs. Arizona 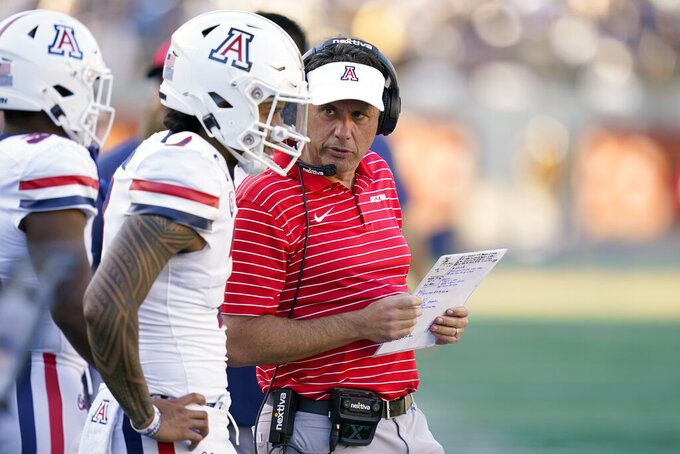 Arizona head coach Jedd Fisch, right, talks with quarterback Jayden de Laura, second from left, before the offense took the field against California during the second half of an NCAA college football game in Berkeley, Calif., Saturday, Sept. 24, 2022. (AP Photo/Godofredo A. Vásquez)

Line: Oregon by 12 1/2, according to FanDuel Sportsbook.

Oregon is in a four-way tie at the top of the Pac-12 along with Utah, UCLA and USC. The Ducks have won four straight games after being thumped by Georgia in the season opener for both teams. Arizona is an improving program under second-year coach Jedd Fisch. The Wildcats have already won three games after finishing 1-11 last season. A victory over the nationally-ranked Ducks would be a huge boost.

Arizona QB Jayden de Laura was exceptional in a lopsided win over Colorado last week, finishing with 484 yards passing and six touchdowns. Oregon's defense is much better than Colorado's, but the Ducks gave up 41 points two weeks ago in a tight win over Washington State.

Arizona: WR Dorian Singer caught nine passes for 163 yards and a touchdown against Colorado. He's had a breakout season and combines with Jacob Cowing to form one of the better pass-catching duos in the Pac-12.

Nix's 141 yards rushing against Stanford was a career high. ... Oregon's allowed just one sack all season, which is the fewest in the nation. ... The Ducks are averaging nearly 41 points per game this season, even after scoring just three points in a season-opening loss to Georgia. ... Oregon DE Brandon Dorlus had two sacks and three tackles for a loss against Stanford. ... Arizona’s most recent victory over Oregon was a 44-15 win in 2018. The Ducks were ranked No. 19 at the time. It's the last time Arizona beat a ranked opponent. ... De Laura's six touchdown passes against Colorado tied a school record. ... Cowing has caught a pass in 37 straight games, which is the second-longest active streak nationally.