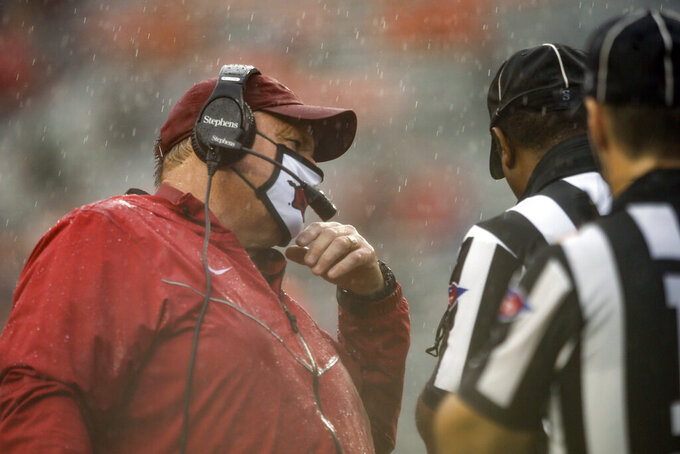 Arkansas head coach Sam Pittman talks with a game official during the first quarter of an NCAA college football game against Auburn on Saturday, Oct. 10, 2020, in Auburn, Ala. (AP Photo/Butch Dill)

AUBURN, Ala. (AP) — Arkansas and Auburn combined to produce a botched extra point, a kicker with two shots at potential game-winners and a hotly debated spiked ball.

Ultimately, Anders Carlson made the most of his second chance, hitting a 39-yard field goal with 7 seconds left to lift the 13th-ranked Tigers to a 30-28 victory over Arkansas on a rainy, blustery Saturday.

The Tigers (2-1, 2-1 Southeastern Conference) narrowly avoided a second straight loss, with drama and uncertainty continuing right up to that winning kick.

Facing third and 1, Bo Nix couldn't handle the snap, picked it up and spiked the ball — appearing slightly behind him — to draw an intentional grounding flag. The play was reviewed and upheld.

“I just told them how you win a lot of times is so important," Auburn coach Gus Malzahn said. “First of all, SEC wins are extremely hard. I’ll keep saying it with this year a 10-game SEC schedule, you’ve already seen it around our league.

"You can’t take anything for granted. You have to play your good football."

Carlson delivered after missing a 34-yard field goal wide right with 2:38 left. Auburn’s defense had forced a three-and-out, and the Tigers got the ball back at the 45 of the Razorbacks, who botched their first PAT and failed on two subsequent 2-point conversion attempts.

But the kick was made possible by the ruling on that spike. Arkansas coach Sam Pittman pleaded with the officials on the sideline after a brief scramble for the ball.

The SEC issued an explanation of the ruling on Twitter Saturday night, confirming that replay showed the pass went backwards.

“However, because recovery of the football was not clearly made in the immediate continuing football action, the ruling on the field was determined to stand under Rule 12-3-2-e-1,” the statement said. It said reversal of the ruling would have required both that it was deemed a backward pass and that there was “immediate clear recovery” of the ball.

Arkansas tried a couple of laterals after a short catch that didn't go far on the final play. The Razorbacks were aiming for a second straight victory against a ranked team after last week's win over then-No. 16 Mississippi State snapped a 20-game SEC skid.

The Tigers survived a week after losing 27-6 to No. 3 Georgia. Freshman Tank Bigsby ran for 146 yards, and Anthony Schwartz gained 100 yards on 10 catches with a touchdown.

Then it came down to Carlson's mulligan.

“I just kind of gave him that look and gave him a fist bump,” Malzahn said.

Feleipe Franks, who passed for 318 yards and four touchdowns, made two huge plays to help Arkansas to a 28-27 lead with 5:29 left.

First, he hit Mike Woods for an 11-yard gain on fourth down. The next play he launched a 30-yard touchdown pass to De'Vion Warren. Trelon Smith ran for 81 yards and had 78 yards receiving.

As for the last spike play, Nix was asked if he thought the spike was in front of him. “Yes, I thought so,” he said.

“We thought it was a fumble, but sometimes the game doesn’t bounce your way," Catalon said. “In that scenario, that’s what it was. We’ve just got to swallow one. Tough one to swallow, but we’ve got to swallow it,"

Arkansas: Couldn't quite get over the hump this time but it's a definite improvement over recent struggles, much of them under new Auburn offensive coordinator Chad Morris. Franks delivered some big plays in a revived passing game.

Auburn: The Tigers got the running game going early after coming in ranked 72nd among 74 active FBS teams. A defense that has been consistently strong has had some struggles. Auburn had blown out Arkansas by an average of 39 points the past four meetings.

"We’ve got a good football team. The times of us going someplace and embarrassing our fans and our football team is over,” Pittman said.

Auburn's Jordyn Peters blocked the fourth punt of his career in the first quarter. Barton Lester recovered this one in the end zone. The last Auburn score on a blocked punt came against Alabama State in 2018 and Peters was responsible for that one, too.

Arkansas hosts Mississippi in a matchup of SEC West teams with first-year coaches.