No. 13 Baylor another shot to clinch Big 12 title game spot 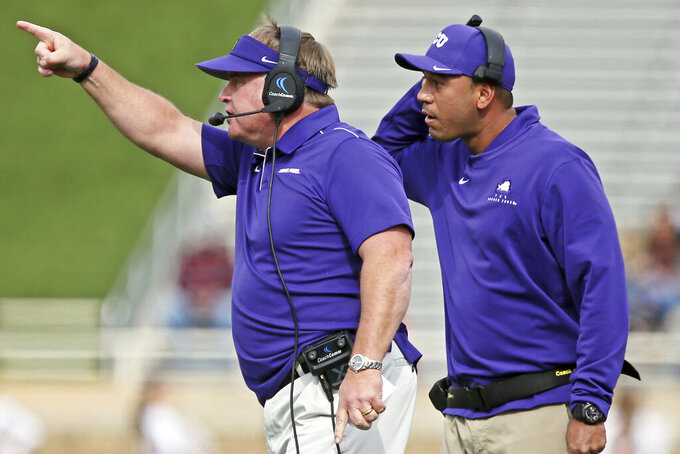 TCU coach Gary Patterson, left, gives instructions from the sideline during the second half of an NCAA college football game against Texas Tech, Saturday, Nov. 16, 2019, in Lubbock, Texas. (Sam Grenadier/Lubbock Avalanche-Journal via AP)

Some things to watch in the Big 12 for Week 13 of the regular season:

Texas (6-4, 4-3 Big 12) at No. 13 Baylor (9-1, 6-1, No 14 CFP). Coming off their first loss after blowing an early 25-point lead at home against Oklahoma, the Bears have another chance at home to clinch a spot in the Big 12 championship game. Bears coach Matt Rhule said he hasn’t talked a lot to his players “about what they can clinch and all that. ... I'm sure they know that.” Baylor last played Texas and Oklahoma in consecutive games in 2002, two lopsided losses long before the Bears were Big 12 contenders. Texas has to win its last two games, and get some help, to get back into the Big 12 title game for the second year in a row. The Longhorns are coming off a 23-21 loss to Iowa State, which kicked a field goal on the game’s final play. The last two wins by Texas have come on game-ending field goals by Cameron Dicker.

Defensive-minded TCU coach Gary Patterson against Oklahoma’s offense. The Horned Frogs (5-5, 3-4), who need one more win to get bowl eligible, lead the Big 12 allowing only 329 yards per game, though they give up 27 points a game. Four-time defending Big 12 champion and No. 8 Oklahoma (9-1, 6-1, No. 9 CFP) can return to the title game with a win. The Sooners lead the nation with 581 total yards per game and are fourth with 47 points a game. TCU has held all 10 opponents below their season averages for total yards, and only one team has been above its season scoring average. Oklahoma has averaged nearly 43 points in winning five in a row by double figures against TCU, whose last win in the series was 37-33 in 2014.

The Big 12 already has six bowl-eligible teams and could get up to nine. TCU needs to win only one of its last two games while Texas Tech and West Virginia — both with first-year coaches — have to win their last two games. Tech plays Kansas State this week before going to Texas, while West Virginia is home against Oklahoma State and finishes the regular season the day after Thanksgiving at TCU. ... Oklahoma State is trying to win at least eight games for the 10th time in the past 12 seasons.

Kansas has lost six of seven games since that shocking 48-24 win at Boston College in Week 3, the Jayhawks’ first road win over a Power Five team in nearly 11 years. They are more than a three-touchdown underdog for their home finale against Iowa State, whose three Big 12 losses are by a combined 10 points. The Cyclones have won the last four games in the series by an average margin of 25 points.

Oklahoma State sophomore safety Kolby Harvell-Peel has created five turnovers in the past two games, with four interceptions and a fumble recovery. He is No. 3 in FBS with 1.6 passes defended per game and No. 4 with five interceptions.