No. 13 Cincinnati opens vs Austin Peay team finishing up 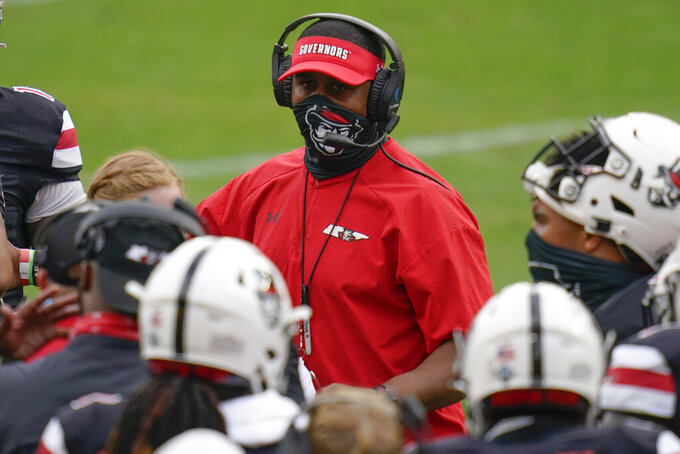 Austin Peay coach Marquase Lovings talks with his team during the first half of an NCAA college football game against Pittsburgh, Saturday, Sept. 12, 2020, in Pittsburgh. (AP Photo/Keith Srakocic) 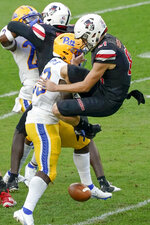 CINCINNATI (AP) — Luke Fickell turned down Michigan State's coaching job in February, content to stay in a place where his family is comfortable and the football team is on the rise. After a delay because of the pandemic, Cincinnati's coach gets to show off what made him stick around.

No. 13 Cincinnati has a delayed season opener Saturday against Austin Peay (0-2) in Nippert Stadium, where fans are banned for now as part of the COVID-19 precautions.

“There's a lot to be done and a lot to be able to handle, so it's not easy,” Fickell said. “Everybody is anxious to get out there and play.”

The Bearcats are facing a team that's already played twice. The Governors are the defending Ohio Valley Conference champions, coming off a 55-0 loss at Pittsburgh. They'll wrap up the fall portion of their schedule against an even better team.

Cincinnati was originally scheduled to open the season against Austin Peay at Nippert Stadium on Thursday, Sept. 3, followed by games against Western Michigan, Miami of Ohio and Nebraska. When the Mid-American Conference and the Big Ten called off football, the Austin Peay game was pushed back to Saturday. Cincinnati added a home game against Army on Sept. 26 before starting conference play the following week at home against South Florida.

The Ohio Valley Conference movedleague games to next spring, resulting in a divided season. Austin Peay wraps up a three-game fall schedule that began with a 24-17 loss to Central Arkansas. The conference hasn't yet announced dates for spring games. The Governors are defending champions, returning 14 starters.

Cincinnati returns seven starters and 13 of the top 15 tacklers from a defense that gave up the fewest points in the American Athletic Conference. Junior quarterback Desmond Ridder is back, along with four starters on the offensive line. Running back Gerrid Doaks moves into a bigger role with Michael Warren II gone. Doaks carried 100 times for 528 yards and five touchdowns last season.

Lovings found the biggest game-day adjustments involve communicating while wearing masks and the uncertainty over how COVID-19 test results could change everything overnight.

“The only different things for coaches is you've got masks on and you're talking into microphones or headsets, and it's sometimes not the easiest to communicate with each other.” he said.

The Governors had huge problems with punting at Pitt. They were down to their fourth long snapper against Central Arkansas, creating problems getting the ball to the punter. Pitt blocked a punt and returned it for a touchdown, and punter Cole Deeds fumbled a snap, ran and tried a desperation kick that hit a Pitt player.

“This is the best team we've seen so far,” he said. “Their punt blocking schemes are going to challenge our punt units.”