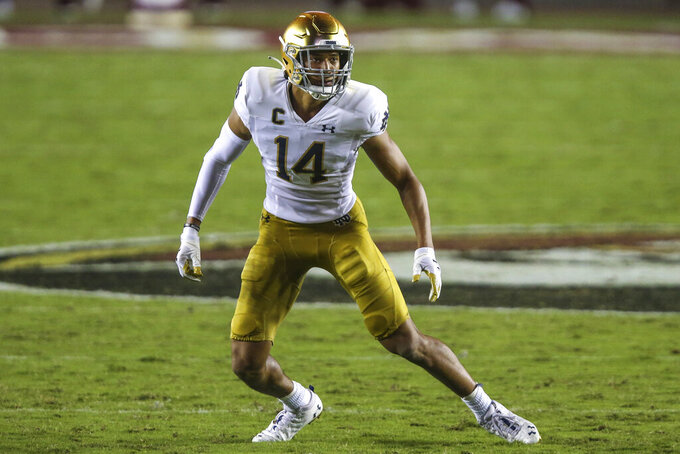 Line: Notre Dame by 6 1/2, according to FanDuel Sportsbook.

Brian Kelly’s Fighting Irish hope to get back on track at home after Cincinnati ended a Notre Dame Stadium streak of 26 straight victories. USC is 2-2 since interim coach Donte Williams took over for Clay Helton, with both victories coming on the road.

Notre Dame: Free safety Kyle Hamilton. The 6-foot-4, 220-pound junior, one of seven team captains, leads the Irish with three interceptions. He is tied for the team lead with four passes broken up and is second in tackles with 32 including two for minus-five yards.

Because of the COVID-19 scheduling restrictions, last year’s game at Memorial Coliseum in Los Angeles was canceled, the first time the teams didn’t play since a 1943-45 hiatus because of World War II. … Notre Dame held on to win the last meeting 30-27 in South Bend on Oct. 12, 2019. … The Irish will be seeking their fourth straight victory over USC under Kelly, who is 7-3 against the Trojans and will be facing his fifth different head coach in 12 seasons. … The Trojans have not won in South Bend since 2011 when Kiffin’s Trojans prevailed over Kelly’s second Irish squad 31-17. … … Notre Dame has won 36 straight games against unranked opponents, the longest active streak in FBS.