No. 13 NC State ready for season of heightened expectations 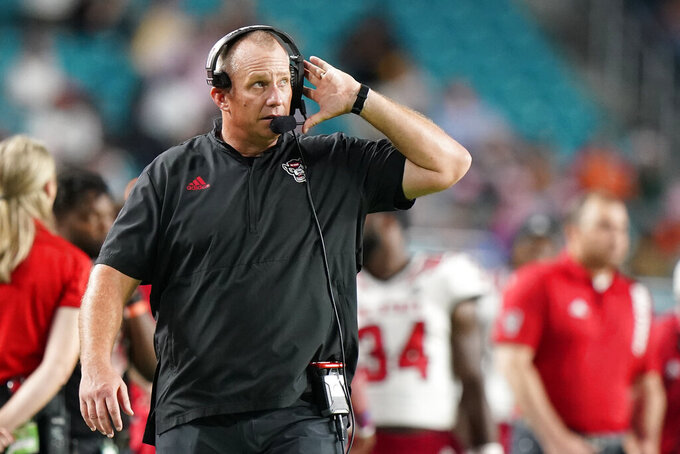 The coach also believes the wait could end this season.

“I want to bring it to them, man,” Doeren said of N.C. State fans. “I want to help them ease that pain.”

The expectations are high with the Wolfpack ranked 13th, matching the program's program’s best for the preseason AP Top 25 set in 1975. N.C. State was the second-leading vote-getter for preseason favorite in the league behind Clemson, though it would have to beat out the Tigers in the Atlantic Division to play for the title in the final year of the league’s two-division format.

The defense has 10 starters back, including top linebacker Payton Wilson from injury, after ranking highly in the Bowl Subdivision ranks. There's also an offense led by the preseason pick for ACC player of the year in quarterback Devin Leary.

N.C. State won nine games last year, including its first win against Clemson since 2011. It missed on a shot to become only the second Wolfpack team to reach double-figure wins when a Holiday Bowl matchup with UCLA was canceled due to COVID-19 issues within the Bruins program.

“It’s not like we won the ACC a year ago and we’re back here and how we’re going to do it again,” said Doeren, now in his 10th season. “We need to get there still."

“I just think the level of expectation is definitely raised,” Leary said. “Guys that have played before and the amount of work we put in last year only got us to nine wins."

Leary’s growth has been key in N.C. State’s rise, starting with his play during an injury-shortened 2020 season.

The fifth-year junior ranked 10th in FBS last year with 35 touchdown passes while also ranking in the top 20 nationally in average passing yards and passing efficiency.

N.C. State’s offense must find new leaders on the ground and through the air.

Fourth-year junior Jordan Houston is the top returning rusher with 83 yards on 20 carries.

The team also lost top receiver Emeka Emezie (802 yards), though there is more experience there with Thayer Thomas (49 career games) and Devin Carter (40).

Defense was a strength last year, with the Wolfpack ranking third in the ACC in total defense (331.6 yards per game, 21st in FBS) and second in scoring defense (19.7, 14th). That came despite multiple season-ending injuries.

The list most notably included Wilson, who led the ACC in tackles and ranked 13th in FBS at 10.8 per game in 2020. Now he’s set to return along with fellow linebacker Isaiah Moore, nose tackle C.J. Clark and safety Cyrus Fagan from that injury list to bolster the unit.

“When we all came to N.C. State, we wanted to put N.C. State in a place it's never been before,” linebacker Isaiah Moore said. “While it's still in progress, it hasn't been done yet.”

The ACC opener comes at No. 4 Clemson on Oct. 1, while another comes at home Nov. 5 against No. 22 Wake Forest in a game that largely decided last year’s Atlantic Division race. The Wolfpack’s final two games come on the road, first at Louisville (Nov. 19) before visiting rival North Carolina on Nov. 25.