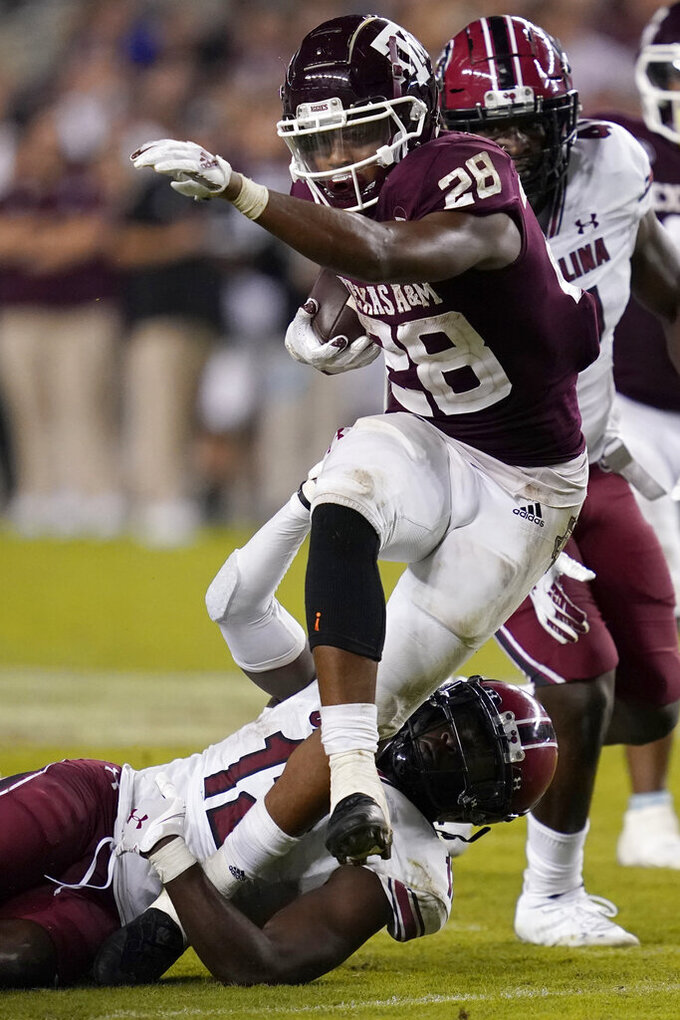 Texas A&M running back Isaiah Spiller (28) steps out of a tackle by South Carolina defensive back Jaylan Foster (12) for a first-down run during the second half of an NCAA college football game on Saturday, Oct. 23, 2021, in College Station, Texas. (AP Photo/Sam Craft)

COLLEGE STATION, Texas (AP) — No. 12 Auburn has made four visits to 13th-ranked Texas A&M and each time the Tigers have left Kyle Field with a victory.

The Aggies lead the all-time series 6-5 thanks to two neutral site wins but will look to beat Auburn at home for the first time Saturday to extend their winning streak to four games.

Coach Jimbo Fisher brushed off concern about Texas A&M’s inability to get a win over Auburn in College Station.

“Eventually those things break, so it’ll happen, and we’ll go,” he said. “But we don’t worry about those things. Each year is a different year.”

Auburn is on a bit of a roll behind quarterback Bo Nix, who is in his third year as the team’s starter. The dual-threat QB has 1,764 yards passing and nine touchdowns and has added four rushing scores this season, with three of them coming in the last two games.

“He’s picking his moments when he runs,” Fisher said. “He knows where he’s going, what he’s doing with it and getting great play action because of the run game, which gets great matchups down the field for him... and he’s just making really good decisions and being smart with the football.”

Nix and the Tigers enter Saturday’s matchup having won big games over Arkansas and Ole Miss since a loss to top-ranked Georgia on Oct. 9. Auburn coach Bryan Harsin was asked how his team would be able to focus on the Aggies.

“Just pop on the film and watch Texas A&M,” he said. “If that doesn’t have their attention, we’re going to get beat. Simple as that.”

Auburn tailback Tank Bigsby had been in a slump after opening with three straight 100-yard games. Bigsby ran for 140 yards and a touchdown against Mississippi. The previous four games, he had produced just 183 combined.

“I know some people thought he was maybe in a funk for a little bit, but I think Tank brings the energy every week,” Auburn center Nick Brahms said. “He brings that same fire every week to run the football hard and that’s his goal.”

The Aggies are the only team to beat Alabama this season, but that victory came after they opened SEC play with consecutive losses. Despite those setbacks, Fisher believes his team’s work has put it in position for November to be meaningful.

“November is always important,” he said. “You put yourself in a position to be relevant during the month of November in the first two months, and we have a chance to do that.”

Auburn is second in the SEC West behind Alabama. After Saturday’s trip to College Station, Auburn hosts No. 15 Mississippi State next week, visits South Carolina Nov. 20 and wraps up November with the Iron Bowl showdown against No. 3 Alabama at home Nov. 27.

The Aggies’ Jalen Wydermyer is one of the SEC’s top tight ends and became the school’s all-time leader in yards receiving by a tight end in his last game. Auburn’s tight ends are featured more in the passing offense under the new coaching staff than they have been in recent seasons.

Wydermyer has 25 catches for 353 yards and four touchdowns. John Samuel Shenker had the first 100-yard game by an Auburn tight end since 1994 and his 273 yards are fourth on the team. Luke Deal, Tyler Fromm and Landen King have also been targeted at times.

“I didn’t know they could catch, honestly,” Brahms said. "Those guys, I thought they were just blockers. We were kind of trying to recruit a couple of them to the O-line until they started catching some stuff, and that kind of went away.”

Auburn’s defense got a big boost from the return of linebacker Owen Pappoe against Ole Miss. He had missed the last four games with a leg injury. One of the biggest beneficiaries may have been fellow linebacker Zakoby McClain, who had 14 tackles and two sacks.