No. 13 Wake Forest looks to stay unbeaten as it hosts Duke 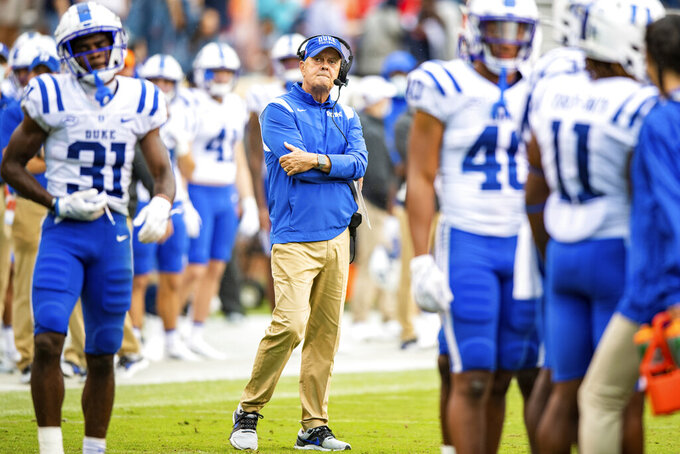 Duke head coach David Cutcliffe looks on during a timeout in the second quarter of an NCAA college football game against Virginia at Scott Stadium on Saturday, Oct. 16, 2021, in Charlottesville, Va. (AP Photo/Mike Caudill)

WINSTON-SALEM, N.C. (AP) — Wake Forest's offense is rolling along to power the 13th-ranked Demon Deacons' push to win their Atlantic Coast Conference division. Duke is trying to find anything approaching that type of efficiency as October winds down.

The Demon Deacons and Blue Devils meet Saturday in the long-running instate series, with Wake Forest looking to stay unbeaten and Duke still looking for its first league win.

The Demon Deacons (7-0) have tied the program record from 1944 for their best start in any season, while they also have their first 4-0 mark ever in the ACC. They're the league's highest-ranked team in the AP Top 25 and one of nine unbeaten teams left in the country, fueled by an offense that ran at near perfection in last weekend's 70-56 win at Army.

“You don't win championships going 7-0," receiver Taylor Morin said. "You don't get rings on your fingers for winning seven games. It's a marathon, not a sprint, so we've got to keep going and the focus this week is Duke.”

The biggest difference is how the teams take care of the football. Wake Forest has six turnovers, ranking fourth nationally in turnover margin (plus-10), while Duke has lost 14 turnovers in the same number of games.

Duke has sputtered since the start of league play, scoring seven points in a loss at North Carolina and suffering a 48-0 loss at Virginia in a four-turnover effort on Oct. 16 before the open week.

“We have a lot of guys that want to win, a lot of guys that are talented enough I think as a team to go out and win games,” Duke quarterback Gunnar Holmberg said. “I think at the end of the day, we've got to kind of look at ourselves and see what we're doing wrong.”

Some other things to know about Saturday’s Duke-Wake Forest game:

But the teams didn’t play last year for the first time since 1967. Their November meeting was postponed and eventually canceled due to COVID-19 concerns for the Demon Deacons.

Wake Forest quarterback Sam Hartman is a fourth-year sophomore, and that experience is showing so far.

Hartman threw for a career-best 458 yards with five touchdowns in the Army win to keep the chains moving and stay in front of an Army offense that could lean on its option-based running game to work on the clock with a lead. Hartman helped Wake Forest score all those points in just 17:17 of possession time.

Hartman has thrown for 19 touchdowns with three interceptions while completing 65.3% of his passes.

Jaquarii Roberson had eight catches for 157 yards and three touchdowns in the Army win, while A.T. Perry continued his season-long rise with six catches for 146 yards and a score — his fifth straight game with a TD catch. And it comes at a position that lost projected top target Donavon Greene to a season-ending injury.

The matchup to watch will be Duke's Mataeo Durant against Wake Forest's run defense.

Durant is ranked fourth nationally by averaging 124.3 yards per game, including a program-record 255 yards in the season-opening loss to Charlotte. The Demon Deacons rank 119th in FBS by allowing 207.7 yards rushing. That includes 416 in last week’s matchup against Army.

Duke isn't afraid to lean on Durant, either. He had a program-record 43 carries in the loss to Georgia Tech earlier this month, and the open date has given him a chance to regroup physically.