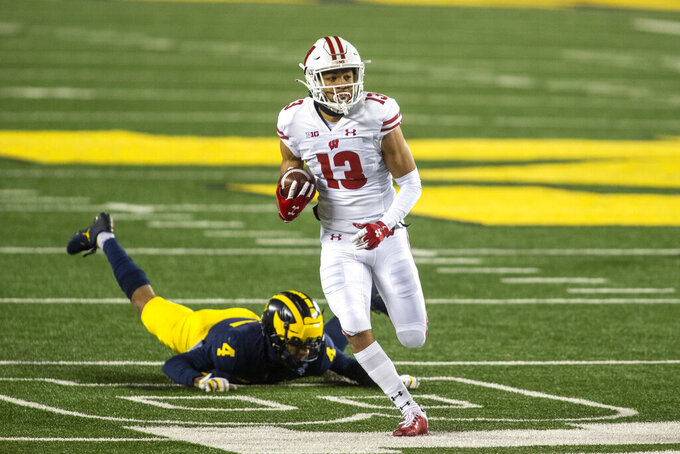 Nakia Watson and Mason Stokke each scored two touchdowns in the first half, helping the Badgers build a big lead in a 49-11 rout of the Wolverines on Saturday night.

Wisconsin (2-0) returned to competition after canceling two games of its all-Big Ten schedule due to a COVID-19 breakout within the program and rolled past a hapless team.

“I’m really proud of the way that everyone kind of worked through what we’ve gone through," coach Paul Chryst said.

The Wolverines (1-3) fell behind 28-0 at halftime, their largest deficit at home since the Big House opened in 1927, and finished with their most lopsided loss at home since a 1935 loss to Ohio State.

“We were thoroughly beaten in every phase," coach Jim Harbaugh acknowledged after the latest loss dropped Michigan to its worst start since 1967. “We didn’t do anything well. We did not play good. We did not coach good."

Early on, it appeared Michigan might put up a fight before getting knocked out in front of friends and family in its mostly empty stadium.

The Wolverines forced the Graham Mertz-led offense to punt after the game's opening possession, only to give the ball back on the next snap when a dropped pass was picked off.

Wisconsin's first two touchdowns — Watson's 2-yard run and Mertz's 1-yard pass to Stokke — were four plays after Joe Milton's passes were intercepted. The running back and fullback scored their second touchdowns on runs in the second quarter, giving the Badgers a 28-0 lead that was large enough against an offensively challenged team.

The Badgers finished with 341 yards rushing and five scores on the ground.

The redshirt freshman wasn't as spectacular as he was in his first career start, when he completed his first 17 passes and matched a school record with five touchdown passes, but the team was just thankful he was cleared to play.

Mertz tested positive for COVID-19 and said he had a series of symptoms for four or five days.

“I guess that’s just the reality we live in now," he said.

Chryst said Mertz had just a couple days to prepare for the game after being cleared.

“For what he had and the time he had, that was a good job of coming back," he said.

As of last week, the Badgers had 27 active COVID-19 cases involving 15 players and 12 staffers.

Milton was 9 of 19 for 98 yards with two interceptions and was replaced when the Wolverines were down 35-3 late in the third quarter. In relief, Cade McNamara completed 4 of 7 passes for 74 yards and a touchdown.

“We’re at a pivotal point where we've got to still have that buy in and believe into everything that we’re doing," defensive tackle Carlo Kemp said.

While Wisconsin did have Mertz on the field, it was without some key players such as running back Garrett Groshek. The team announced that 10 players would not be available to play at Michigan, but didn't say why they were out of the lineup. Wide receiver Kendric Pryor, who had two catches for 27 yards, left the game with an upper-body injury

The Wolverines were missing their starting offensive tackles, Jalen Mayfield and Ryan Hayes, along with defensive ends, Aidan Hutchinson and Kwity Paye, due to injuries.

Wisconsin: The program scored a victory when its test results were good enough to resume the season. The Badgers must hope to play, and win, their final four scheduled games because teams must play at least six games to qualify to play for the league championship in the pandemic-shortened season.

Michigan: Harbaugh's sixth season, the state of his program is being scrutinized and he doesn't seem to have answers to fix many problems for a team that was ranked No. 16 in the preseason. Harbaugh fell to 0-11 as an underdog at Michigan, where he has one year left on his contract. His next chance to pull off an upset might have to wait until Dec. 12 on the road against No. 3 Ohio State

The Badgers might up a little after slipping in the two weeks they were idle after rising to No. 9 in the AP Top 25 with the win over Illinois.

Wisconsin plays at No. 23 Northwestern (4-0) in a possibly pivotal division game.