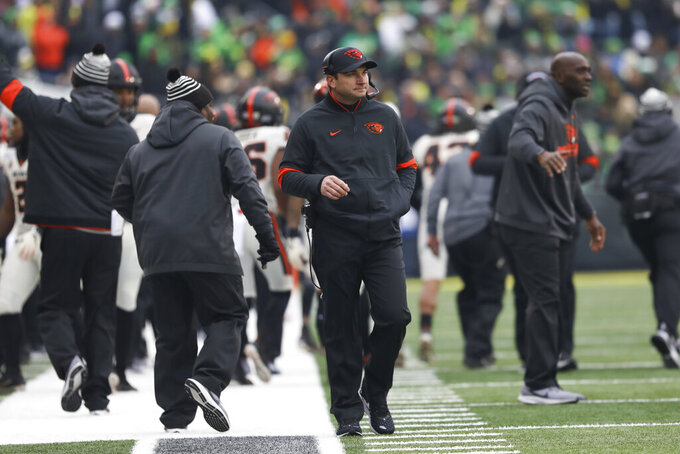 Oregon State head coach Jonathan Smith keeps an eye on the scoreboard during the first half of an NCAA college football game in Eugene, Ore., Saturday, Nov. 30, 2019. (AP Photo/Amanda Loman)

EUGENE, Ore. (AP) — While Justin Herbert had a season low for passing yards in his final game at Autzen Stadium, Oregon’s senior quarterback didn’t seem all that disappointed.

“The best part? The game’s not decided on my individual performance. It’s who scores the most points, and we did that today,” Herbert said after throwing for 174 yards and a touchdown in No. 14 Oregon’s 24-10 victory over Oregon State on Saturday in the 123rd Civil War.

Oregon (10-2, 8-1 Pac-12) wrapped up the regular season with a perfect record at home for the eighth time. The Ducks reached 10 wins overall for the first time since 2014.

Oregon State (5-7, 4-5) was denied a bid for bowl eligibility in coach Jonathan Smith’s second year. The Beavers haven’t made a postseason appearance since 2013.

Trailing 17-3 at the start of the fourth quarter, Oregon State closed the gap on Jermar Jefferson’s 19-yard touchdown run with 11:03 left.

Herbert appeared to hit Jaylon Redd with an 8-yard touchdown pass but a review determined Redd fumbled before scoring, giving the ball to the Beavers. Oregon State’s drive fizzled on a fourth-and-5 attempt, turning the ball over on downs to set up Cyrus Habibi-Likio’s 20-yard touchdown run with 1:15 left.

Oregon was cruising toward a possible bid in the College Football Playoff last weekend when it was upended 31-28 at Arizona State. The loss dropped the Ducks from No. 6 in the rankings.

Oregon was already assured of a spot in the Pac-12 championship game Friday in Santa Clara, California. The Ducks will face No. 6 Utah, the Pac-12 South winner after a victory over Colorado.

“We’ve got a great opportunity on Friday, we’re going to do our best to fix what we did wrong today,” Herbert said simply, avoiding a question about the team’s Rose Bowl hopes.

Oregon State has already collected more wins this season than in the previous two years combined. Picked in the preseason to finish last in the Pac-12 North, the Beavers surpassed expectations but couldn’t quite get to a bowl with losses in their final two games.

Herbert was a freshman when the Beavers last beat the Ducks. He has 94 career passing touchdowns, most among active players nationwide, and second only to Marcus Mariota on Oregon’s career list.

Gebbia, a Nebraska transfer who competed with Luton in fall camp for the starting nod this season, had thrown for 104 yards with two touchdowns and an interception this season, before his first career start.

Luton struggled with injuries throughout his Oregon State career, earning the sixth year of eligibility. He threw for 2,714 yards and 28 touchdowns in his final year with just three interceptions.

“It was hard. Jake is a leader, a sixth-year senior and he was waiting for this game,” receiver Isaiah Hodgins said. “I know it definitely sucked for him to sit out and it hurt him. But I think Tristan did a good job of kind of shaking off the jitters and getting going, and giving us a couple of good drives. We could have done a little bit more to help him out, but I feel he came in there and stepped up.”

But Mykael Wright returned the kickoff 98 yards for a touchdown to put the Ducks up 10-3. It was Wright’s second kickoff return for a TD this season and the longest in the history of the Civil War.

“It means a lot to me, because growing up, I loved Oregon football, and I loved D’Anthony Thomas, and this is what he did,” Wright said. “So me being able to do this, it’s really a blessing.”

Oregon State: Hodgins was averaging 98.7 receiving yards going into the game. He caught eight passes for 85 yards against the Ducks. Saturday’s game could be his final appearance for the Beavers because he may follow his dad James’ footsteps to the NFL. ... Safety David Morris had to be helped off the field in the third quarter with an apparent leg injury.

Oregon: Oregon honored its seniors before the game. Among them was senior tight end Matt Mariota, Marcus Mariota’s little brother. Other Ducks brothers: Herbert’s younger brother, Patrick, a freshman tight end, and linebacker Troy Dye’s younger brother, Travis, a sophomore running back. ... It was Troy Dye’s last game at Autzen. Like Herbert, he eschewed the draft and instead decided to stay at Oregon for his senior season.

Smith was encouraged by his team’s performance this season, even though the Beavers didn’t quite make it to a bowl.

“I do think we’re getting better and I do think we’ve got some real momentum,” Smith said. “We’ve got a lot of players coming back that I’m excited about coaching the next couple years.”

Oregon State is finished for the season.

Oregon: Will face the winner of the Pac-12 South in the conference title game.