No. 14 Fighting Irish looking to get well against the Hokies 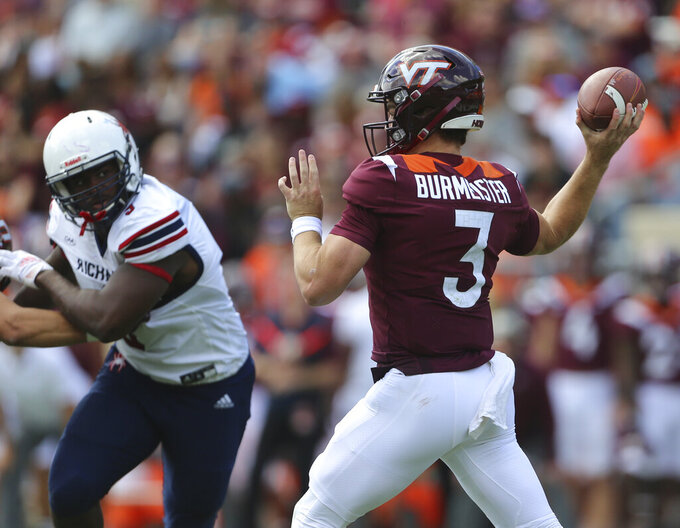 Line: Notre Dame by 1/2, according to FanDuel Sportsbook.

The Fighting Irish dropped in the Top 25 after losing 24-13 to now No. 5 Cincinnati, while the Hokies have lingered on the cusp of the Top 25 despite a loss at West Virginia. Virginia Tech is playing six of its first seven games at home.

Whoever quarterbacks the Fighting Irish vs. the Hokies defense. Notre Dame used three quarterbacks – graduate transfer Jack Coan, true freshman Tyler Buchner and sophomore Drew Pyne – in the loss to Cincinnati that ended the team’s 26-game winning streak at Notre Dame Stadium. Notre Dame QBs have been sacked 22 times. Coach Brian Kelly says he knows who will start, but hasn't revealed who it will be.

Notre Dame: RB/KR Chris Tyree. Then a junior all-purpose back at Thomas Dale High School in Chester, Virginia, just south of Richmond, he attended No. 6 Notre Dame's visit in 2018 and said he remembers the stadium shaking and wanting to play there. He picked Notre Dame over Alabama and Oklahoma.

Virginia Tech: DL Amare Barno. He only has 1 1/2 sacks through four games, but led Division I with 16 tackles for a loss last season and could present a problem for Notre Dame's leaky pass protection.

Notre Dame has won 35 consecutive games against unranked opponents and 20 in a row in the regular season against teams from the Atlantic Coast Conference. ... This is the first of two visits to Virginia for Notre Dame, which will play at Virginia on Nov. 13. ... The Hokies beat then No. 10 North Carolina 17-10 to open the season and will be seeking their second victory against a Top 25 team for the first time since 2009. ... Virginia Tech has won eight straight when leading at halftime.