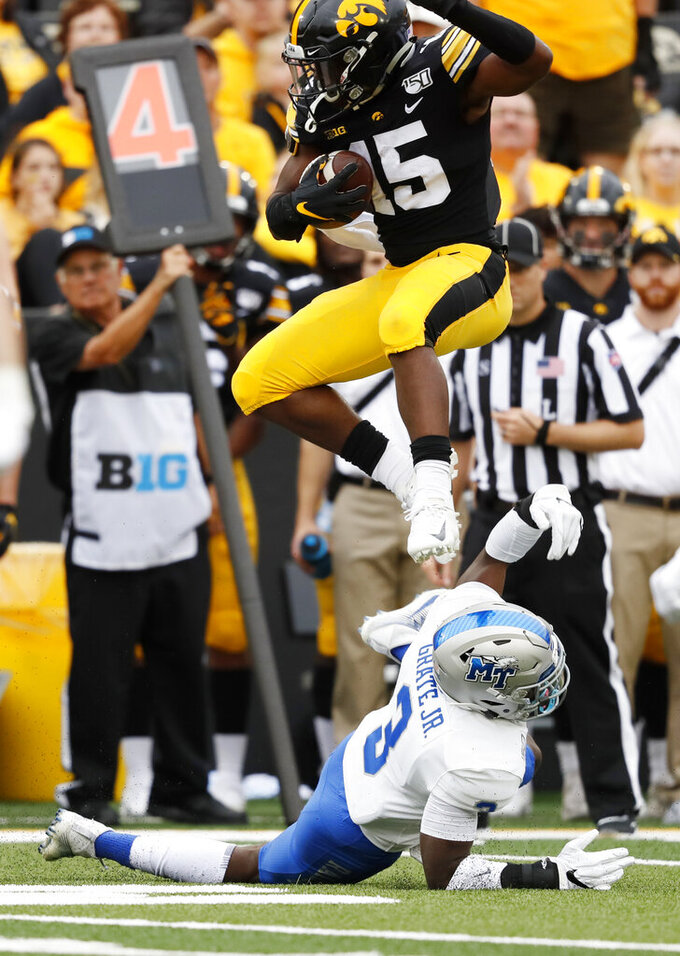 IOWA CITY, Iowa (AP) — Iowa's offense sputtered at times over the past few years because it never quite knew what it might get out of its rushing attack.

The 14th-ranked Hawkeyes are soaring this season behind a ground game that appears to have found its way.

The Hawkeyes racked up 351 yards on the ground in last week's 48-3 blowout of Middle Tennessee, powering an offense that finished with 644 yards. That total was the most in coach Kirk Ferentz's 21 seasons in charge.

Arguably Iowa's biggest priority in the offseason was to fix its rushing attack, a foundational piece of a program that's constantly striving both for balance and to control the clock.

The Hawkeyes were 95th nationally in rushing offense in 2018 and 97th two seasons ago despite running the ball 56 percent of the time during those years.

Despite some upheaval along their offensive line, the Hawkeyes broke through on the ground in September.

Redshirt freshman center Tyler Linderbaum, who switched over from defense during bowl preparation, has blossomed into an anchor for a unit that's getting much more consistent downhill push up. Iowa has even overcome the loss of star tackle Alaric Jackson, who is expected to return this weekend after missing three games with a sprained knee.

Jackson practiced on Tuesday, a promising sign for his availability.

"Everybody is really paying attention to the details, especially in practice. You don't just show up on game day and establish the run," quarterback Nate Stanley said.

All that extra space created by the line has led to career-best starts for Young and Mekhi Sargent, also a junior.

Sargent, the starter, is averaging 5.5 yards a carry with a pair of touchdowns. Young has exploded for 7.6 yards an attempt, and he had a career-high 131 yards on just 11 attempts last weekend.

Iowa's 217.5 yards rushing through four games ranks 29th in America, despite the fact that the Hawkeyes are running the ball at nearly the exact same rate, 56.7 percent, as in 2017-18.

"When you have an explosive (play), it does carry over to the next play because, on the next play, you want to capitalize on that," Sargent said.

Iowa's success running the ball could wind up being a major problem for Big Blue on Saturday.

"They just run the ball very well," Michigan defensive tackle Carlo Kemp said. "They got a really good offensive line and they trust them, and they've got a good set of tailbacks."