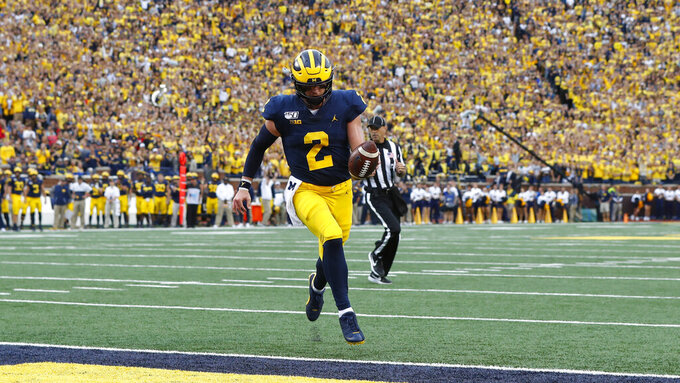 ANN ARBOR, Mich. (AP) — No. 14 Iowa and No. 19 Michigan have at least one thing in common, failing to finish first since the schools shared the Big Ten title in 2004.

Michigan, meanwhile, is in its longest skid without a conference title in program history.

The Big Ten will not be won when the two teams meet Saturday at the Big House, but a loss certainly won’t help their chances.

Iowa’s Nate Stanley might be one of the best quarterbacks under the radar. Stanley has yet to throw an interception in 2019, attempting 136 passes without getting picked off since last season. He has thrown eight touchdown passes this season and 60 in his career, putting him two touchdown passes shy of passing Drew Tate for second on Iowa’s all-time list behind 1985 Heisman runner-up Chuck Long. Stanley, who is 21-9 as a starter for the Hawkeyes, is averaging 241 yards passing per a game.

The senior is looking forward to his first and only visit to the Big House.

“Obviously, it’s a great environment, one of the historic venues in college football,” he said. “It should be a great opportunity to play in a special environment.”

Michigan running back Zach Charbonnet has carried the ball a total of seven times since he was handed the ball 33 times in a double-overtime win over Army. The freshman standout is sharing time in the backfield with Christian Turner, Hassan Haskins and Tru Wilson.

Harbaugh acknowledged he’s trying to limit the number of times Charbonnet carries the ball, saying 33 times is too many in one game.

"Occasionally, that may occur,” Harbaugh said. “Not something I think you want to consistently do with running backs.”

Oliver Martin was on Michigan’s football team last spring, competing for playing time. The receiver transferred to Iowa in the summer to play for his hometown team. Martin was granted a waiver to play immediately, putting him on the field with former teammates.

After Michigan routed Rutgers 52-0 last week, linebacker Cam McGrone was asked about the team getting widely criticized about its 35-14 loss at Wisconsin.

“I’m not really tired of it because, you know, it happened,” McGrone said. “But we definitely embrace it because we know we’re going to see them again in Indy, in my hometown for the Big Ten championship. So, I don’t really mind hearing about it because I know when we see them again, we’re gonna smack them in the mouth.”

Iowa’s revamped rushing attack is averaging nearly 5.2 yards per carry and the team hasn’t lost a fumble in three games. The Hawkeyes and Oregon State are the only teams in America that have only committed one turnover so far.

Iowa rotates running backs Mekhi Sargent and Tyler Goodson behind an offensive line with two seniors and two juniors. The Wolverines were pushed around two weeks ago at Wisconsin and allowed Jonathan Taylor to run for 203 yards and two touchdowns in a 35-14 win.