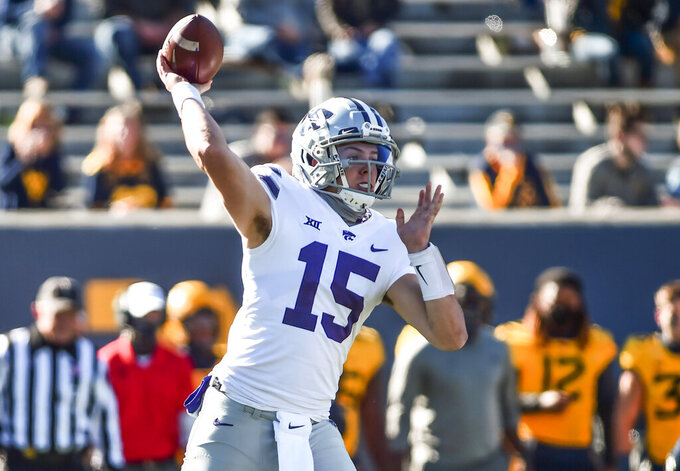 MANHATTAN, Kan. (AP) — Oklahoma State and Kansas State appeared to be on a collision course between Big 12 unbeatens a week ago, each team taking on an unranked opponent before they face each other in Saturday's showdown in Manhattan.

So much for that.

In wildly different ways, the then-No. 6 Cowboys and then-No. 16 Wildcats lost their first league games of the season to send each of them into this week's game looking for redemption. Oklahoma State committed four turnovers that allowed Texas to take their game to overtime, where the Longhorns escaped with a 41-34 victory. Kansas State was battered by West Virginia 37-10 in Morgantown in a game that was never close in the second half.

All of which may put even more importance on the No. 14 Cowboys' trip to Kansas State. Both teams remain tied with Iowa State in the loss column in the Big 12 race as this bizarre, COVID-19-addled season hits its homestretch.

“We'll find out how we respond when adversity strikes. We'll find out the character and resolve of our guys,” Kansas State coach Chris Klieman said. “You have to attack adversity. We didn't play well. It was on the road and we fell behind and had a hard time digging ourselves out of it.”

Klieman had a hard time pinpoint exactly what went wrong in Morgantown, but Oklahoma State counterpart Mike Gundy knew exactly where to place the blame in Stillwater: turnovers. Spencer Sanders threw an interception, lost the ball on a sack and fumbled an exchange; running back LD Brown also coughed the ball up.

Hard to win many games when you're minus-4 in the turnover column.

“It was almost like a perfect storm,” Gundy said. “You beat me, you beat me. I'm good. It's the way life is. But all I'm saying is I wish a little bit of that perfect storm went the other way, but that's football."

Besides, plenty of opportunities still lie ahead. Kansas State (4-2, 4-1) still faces the Cyclones and two-loss Texas down the stretch, while the Cowboys (4-1, 3-1) still have the Bedlam game against Oklahoma before a soft finishing kick.

“It's one of the most important things at this point of the season to keep that positive motivation,” Oklahoma State wide receiver Tylan Wallace said. “We still have a lot of football left to play and we can't take those games off. It doesn't work like that.”

Kansas State freshman Deuce Vaughn has been a workhorse at running back this season, but he was held to nine carries for 22 yards by the Mountaineers. That led some to suggest that he may have been a bit banged up.

“He was fine. He didn’t practice a bunch last week because of an issue, but he was healthy for the game,” Klieman said. “As talented as that young man is, you have to find ways to take him away. West Virginia did that.”

Another freshman, Will Howard, also learned a couple of hard lessons at West Virginia. Pressed into service following the season-ending injury to Skylar Thompson, Howard had guided the Wildcats rather well the first couple weeks. But he was just 19 of 37 for 184 yards with a touchdown and three interceptions against the Mountaineers.

Sanders took the Cowboys' loss to Texas particularly hard because of his turnover troubles, even though he threw for 400 yards with four TD passes and was perhaps the biggest reason Oklahoma State managed to get to overtime.

“With people like Spencer you just have to be supportive of them. You have to reiterate to him that it’s not a one-person game,” Oklahoma State offensive lineman Josh Sills said. “You win as a team, you lose as a team."

The Wildcats have dealt with injuries and COVID-19 positives that have depleted their roster all season, but they could get a couple crucial pieces back for Oklahoma State. Defensive back A.J. Parker practiced this week after hurting his ankle against Kansas while tight end Briley Moore is “feeling better,” Klieman said, after hurting his back against West Virginia.

Oklahoma State handled the Wildcats relatively easily last season, winning 26-13 in Stillwater. The undisputed star that evening was Cowboys running back Chuba Hubbard, who ran 25 times for 296 yards and a touchdown. Most of the damage came after an hour-long lightning delay and included runs of 53, 84 and 44 yards.

“We gave up the explosive play via the run last year. We cannot do that to be successful,” Klieman said. "If he has a huge day, then we’re stacking the box with more and more guys, and then it creates all sorts of other issues. We have to come up with a great game plan.”