No. 14 Utah has outside Pac-12 title shot, focus on Colorado 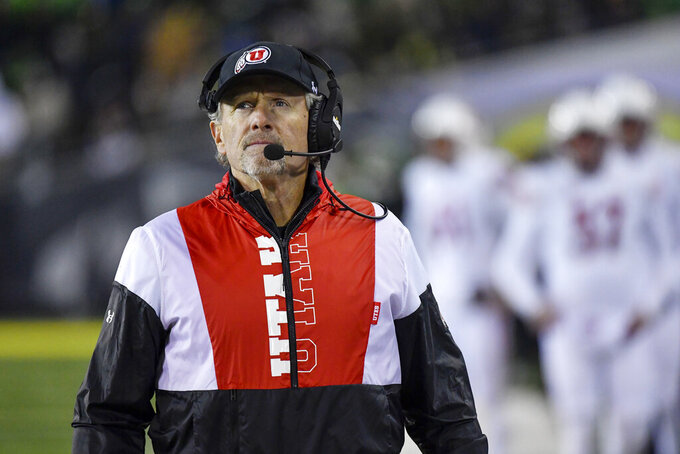 Utah head coach Kyle Whittingham looks at the scoreboard after taking a timeout against Oregon during the second half of an NCAA college football game Saturday, Nov. 19, 2022, in Eugene, Ore. (AP Photo/Andy Nelson)

BOULDER, Colo. (AP) — The Utah Utes comprehend the complexity of what needs to happen to get into the Pac-12 championship game.

The convoluted equation all starts with the 14th-ranked Utes knocking off a struggling Colorado team Saturday at Folsom Field.

“Can’t have a hangover. Can’t feel sorry for yourself,” Utah coach Kyle Whittingham said of the 20-17 loss in Eugene. “You’ve got to pick yourself back up. Mathematically, we still have a pathway to the championship.”

The formula is a lengthy one. The key ingredient is a sixth straight win over Colorado (1-10, 1-7). On top of that, the Utes need No. 12 Washington to beat Washington State, No. 22 Oregon State to knock off Oregon and No. 17 UCLA to get by Cal.

That would create a three-way log jam between the Utes, Ducks and Huskies. Utah’s league opponents would have the highest combined winning percentage in conference games and give the Utes the final spot and a chance to defend their league title. No. 5 USC has already clinched a berth in the Pac-12 title game.

“We’ve got a chance,” Whittingham said. Utah enters as a 29 1/2-point favorite against Colorado, according to FanDuel Sportsbook.

Whittingham said the coaching staff has to make sure last weekend doesn't weigh on the team.

“If we walk around feeling sorry for ourselves and moping, the players read that. Your players are reading you every single day,” Whittingham said. “You better be practicing what you preach. It’s nothing new to have that mindset when you come back, to put it behind you and move forward.”

Saturday will also be an interesting day for Buffaloes interim coach Mike Sanford, who figures to hand off the keys to the program after the season finale. Sanford is 1-5 since taking over after coach Karl Dorrell was dismissed in October.

“The legacy that I hope I’m leaving and that our staff is leaving, is that we’re genuine, we’re real,” Sanford said. “We’re in it for them (the players), not us. We did everything we could to push this program in the right direction.”

The Utes were the media's preseason pick to repeat as the conference champion. They won last season by beating the Ducks 38-10 in the Pac-12 title game.

“To have a (potential) 7-2 record (in the conference) be somewhat of a disappointment is probably a compliment in a way,” Whittingham said. “But we’re not focused on that. We’re just trying to repeat as conference champs.”

TOPS ON BOTH SIDES

Quarterback Cameron Rising has Utah ranked in the top 25 in total offense. On the other side of the ball, Clark Phillips III has helped the Utes to a top 25 ranking in total defense.

“Probably the team I like the least in the conference, which is fair. I've never beat them or anything,” Colorado senior tight end Brady Russell said. “Hopefully go change that this week.”

Sanford recently went through a lengthy list of seniors and other players who are potentially leaving the program and spoke glowingly about each one. At the present moment, there are 19 Buffaloes slated to run onto the field behind live mascot Ralphie for the final time.

“They need to be honored the right way," Sanford said of the departing players. "By us as a coaching staff, by us as a fan base, by us as a CU family.”

Whittingham has been with the Utes in some coaching capacity since 1994, which Sanford finds enviable. Sanford has a daughter who he said has dealt with nine moves over his career.

FOUR IN A ROW

Colorado will be playing its fourth straight ranked team. The Buffaloes also played four ranked squads in a row during the regular season in 1973. That year, they faced No. 3 Oklahoma, No. 8 Missouri, No. 13 Nebraska and No. 18 Kansas, beating only the Tigers.