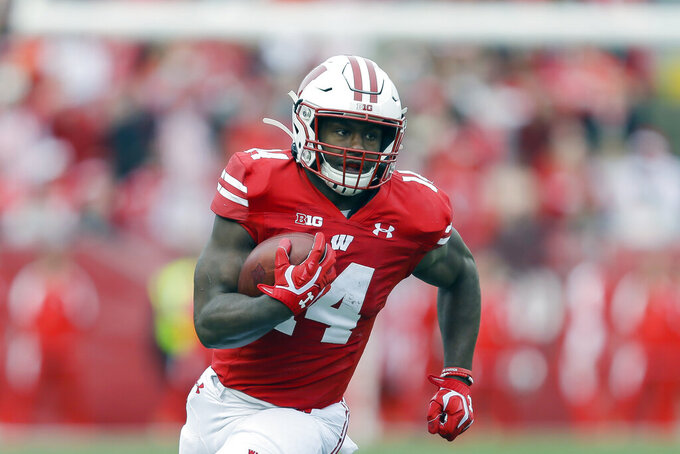 FILE - In this Oct. 12, 2019, file photo, Wisconsin running back Nakia Watson (14) carries during the first half of an NCAA college football game in Madison, Wis. Wisconsin’s rushing attack will look quite a bit different this season without Jonathan Taylor in the backfield. Wisconsin begins adjusting to life without Taylor on Friday night, Oct. 23, 2020, when the 14th-ranked Badgers host Illinois in their pandemic-delayed season opener.(AP Photo/Andy Manis, File)

Wisconsin’s rushing attack will look quite a bit different this season without Jonathan Taylor in the backfield.

The Badgers hope it won’t necessarily be that much less potent.

Wisconsin begins adjusting to life without Taylor on Friday night when the 14th-ranked Badgers host Illinois in their pandemic-delayed season opener. Taylor went to the Indianapolis Colts in the second round of the NFL draft after becoming the first Bowl Subdivision player to need just three seasons to rush for over 6,000 yards.

“JT used to always say the standard is the standard,” fifth-year senior running back Garrett Groshek said. “That’s what our goal is, at least in the running back room, to be at the exact same level if not higher and to keep raising the level of running back play at Wisconsin.”

A Wisconsin player has won the Doak Walker Award as the nation’s top running back four of the last eight years. Montee Ball won it in 2012, Melvin Gordon got it in 2014 and Taylor earned the honor each of the last two seasons.

This marks the first time since 2006 that Wisconsin has opened a season without a single player who has rushed for at least 100 yards in a single game.

Yet the Badgers remain confident in the guys who will be carrying the ball this season.

“I like the pieces,” coach Paul Chryst said. “Now we’ve got to put it all together.”

Wisconsin’s depth chart lists either Groshek or sophomore Nakia Watson as the first-team running back this week. Chryst says sophomore Isaac Guerendo also will get opportunities.

Groshek, a former walk-on, has 916 career yards rushing. He had 42 carries for 198 yards and two touchdowns last year while also catching 29 passes for 289 yards.

They’ll be running behind a line that lost three starters from the team that went 10-4 and reached the Rose Bowl last year, though 32-game starter Jon Dietzen is back after he missed the 2019 season due to injuries.

“Jonathan Taylor is Jonathan Taylor, obviously,” offensive tackle Cole Van Lanen said. “But our running backs are solid. I’m really excited for them. You’ve seen some things they can do in the past when they’ve had their opportunities. Now it’s their time.”

If this turns into more of a backfield by committee, the members of it believe they can provide an effective combination.

Watson describes himself as a power runner while praising Groshek’s football IQ. Watson noted that he can go over film and let Groshek know when the fifth-year senior could have run over someone. Watson also said Groshek often sees things on the field he might have overlooked.

“I feel we complement each other in that way, and we feed off each other,” Watson said.

At the start of the preseason, it seemed as though the presence of senior quarterback Jack Coan could take some pressure off the Badgers’ untested rushing attack. That changed when Coan injured his right foot in practice and had to undergo surgery.

Coan is now out indefinitely and redshirt freshman Graham Mertz will start. It means Wisconsin lacks proven playmakers in both the running game and the passing game and the rushers must produce right away.

“I’m really confident in them,” offensive coordinator Joe Rudolph said. “I’m excited to see it. JT brought some great attributes to what he did and how he executed. You know what? So will Groshe. So will Nakia and so will Isaac. The whole group. It will be their personality on it and their skill set on it. I’m excited for it.”