No. 15 Badgers carry their West hopes with them to Nebraska 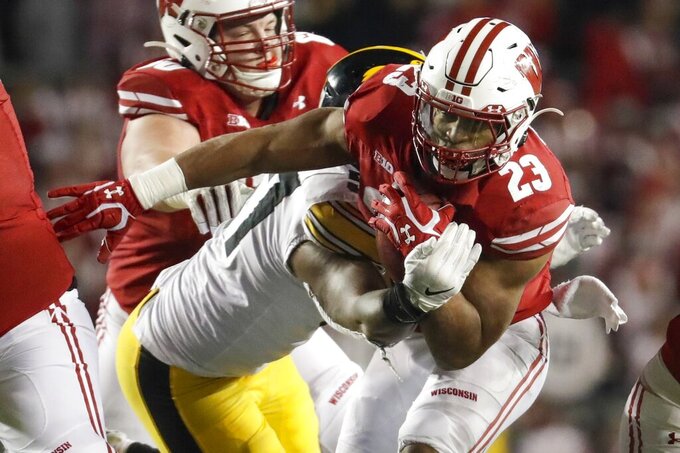 Wisconsin is two games behind Minnesota in the West and is going to need help to win the division. The Badgers must beat Nebraska, Purdue and Minnesota and have the Gophers lose to either Iowa or Northwestern or both. Nebraska must find at least two wins in games against Wisconsin, Maryland and Iowa to achieve bowl eligibility for the first time in three years.

Nebraska’s defensive front vs. running back Jonathan Taylor. If the Cornhuskers struggle to stop the run like they normally do against Wisconsin, it’s going to be a long afternoon. Taylor owns two of Wisconsin’s five 200-yard games against Nebraska since 2012 and has averaged 9.6 yards per carry against the Huskers. After piling up 250 against Iowa last week, he’ll be going for his 11th 200-yard game, which would put him in a tie with Marcus Allen, Ricky Williams and Ron Dayne for most in an FBS career.

Wisconsin: Linebacker Zack Baun. The senior has caught the eye of Nebraska coach Scott Frost, who noted his physical style, ability as a pass rusher and penchant for making plays all over the field. Baun has 7.5 sacks and 12 tackles for loss.

Nebraska: Quarterback Adrian Martinez. The sophomore is looking to bounce back after a poor outing against Purdue two weeks ago. That was his first game back after injuring his left knee Oct. 5. It’s been an unremarkable season for Martinez, whose numbers as a runner and passer are down significantly from a comparable point last year.

Since Nebraska joined the Big Ten in 2011, Wisconsin has averaged 312.5 yards rushing in eight games against the Huskers and 235.1 in its 101 other games. ... Wisconsin has allowed two touchdowns while outscoring opponents 179-26 in first halves. ... Nebraska has been outscored 93-47 in third quarters. ... Taylor needs 160 yards to pass two-time Heisman Trophy winner Archie Griffin of Ohio State for second place on the Big Ten’s all-time rushing list. Taylor has 5,430 career yards.