No. 15 Coastal Carolina looks for more history vs App State 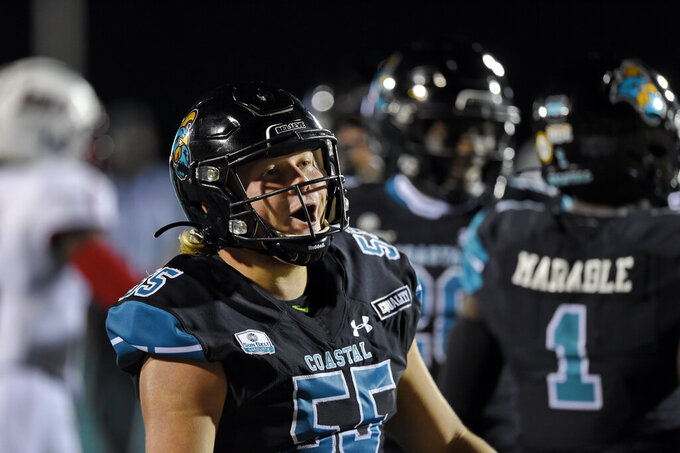 Coastal Carolina's CJ Schrimpf (55) reacts after making a play during the first half of an NCAA college football game against South Alabama, Saturday, Nov. 7, 2020, in Conway, S.C. (AP Photo/Richard Shiro)

It's been a history-making period for Coastal Carolina athletics. The 15th-ranked Chanticleers football team hopes to add to the major accomplishments against Appalachian State this weekend.

“It makes you proud to be affiliated with Coastal Carolina,” offensive lineman Trey Carter said of all the success.

Carter's team is doing its part to make Coastal proud with a 7-0 start, its national ranking (highest of any Sun Belt team in poll history) and its pursuit of a Sun Belt title.

The Chants (5-0 Sun Belt) can take a big step in that direction by defeating the four-time defending conference champion Mountaineers (6-1, 4-0).

End Appalachian State's 6-0 all-time mark against Coastal Carolina, and the Chants will have a leg up on the league's East Division and spot in the title game.

“It's a special time,” Chants coach Jamey Chadwell said. “Now, if only we could get DJ to give us a shout out.”

They'll be a lot of shouting if Coastal Carolina can extend its best FBS start since moving up three up to the football division years ago.

Appalachian State has won five straight since its nonconference loss to undefeated Marshall, tied with Coastal at No. 15 in this week's poll.

“Going into the season I knew they wouldn't be last in the conference as they were picked,” Clark said. “We played them the last couple of years and they kept getting better and better.”

Some other things to watch when Appalachian State faces No. 15 Coastal Carolina:

They haven't played each other much, but Appalachian State and Coastal Carolina have met enough to build up a world of harsh feelings the past few years. “We don't need to make this game bigger than what it is. We don't like these guys, they don't like us and we really can't wait to get out there Saturday,” Coastal linebacker Teddy Gallagher said.

It didn't take long for eyes to turn toward Coastal Carolina coach Jamey Chadwell when discussing candidates for the opening at South Carolina. The Gamecocks fired Will Muschamp on Sunday. Chadwell joked that night his biggest worry was getting the brakes fixed on his wife's vehicle and not whether he had interest in other jobs.

Appalachian State quarterback Zac Thomas took a big hit late in last week's 17-13 win over Georgia State. He had to leave the game and was taken to a hospital as a precaution. But Mountaineers coach Shawn Clark said Thomas is doing well and Chadwell fully expected to see the senior behind center on Saturday. Thomas has thrown for 1,285 yards with 12 touchdowns and five interceptions.

One edge in Appalachian State's favor is its experience in big games that dates back to its monumental upset of Michigan in the Big House in 2007. While no one on this team was on that roster, the Mountaineers toppled two Power Five programs last season in North Carolina and South Carolina.

“Our guys have played in big games and know what to expect,” Clark said. But “every week's different.”

Appalachian State coach Shawn Clark remembers trying to recruit Coastal Carolina quarterback Grayson McCall to join the Mountaineers a couple of years back. Clark knew then McCall would have a stellar college career as he's showing with the Chants. McCall, a redshirt freshman, has thrown for 16 touchdowns against one interception. “Just knowing Grayson, nothing fazes him,” Clark said. “It doesn't matter who he's playing.”