No. 15 Coastal Carolina seeks control of East vs. App State 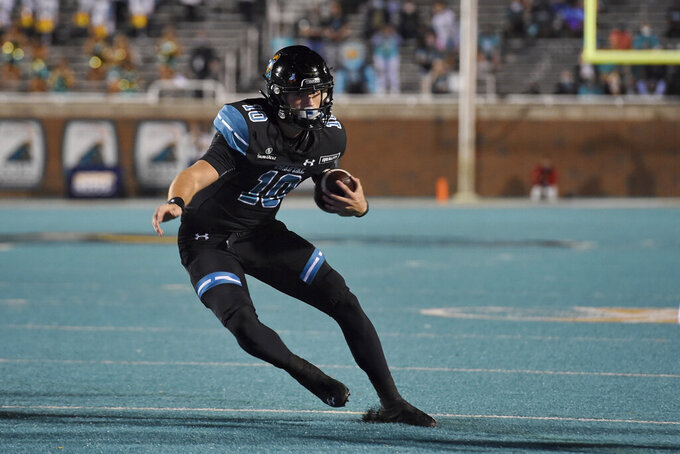 Coastal Carolina quarterback Grayson McCall scrambles out of the pocket during the first half of an NCAA college football game against South Alabama, Saturday, Nov. 7, 2020, in Conway, S.C. (AP Photo/Richard Shiro)

Coastal Carolina could take control of the Sun Belt Conference's East Division with its first win over Appalachian State, the defending league champion. The Chants have lost all six previous meetings with the Mountaineers, including all three since moving to the FBS and joining the Sun Belt. Appalachian State would have the tiebreaking edge in the division if it wins.

Coastal Carolina QB Grayson McCall vs. Appalachian State's pass defense. McCall is a redshirt freshman who's played close to mistake-free football this season with 1,393 yards passing, 16 touchdown passes and one interception. The Mountaineers are fourth in the Sun Belt and 19th nationally in yards allowed at 185 per game.

Appalachian State: QB Zac Thomas, a poised and polished senior, has led the Mountaineers to five straight victories, throwing for 1,283 yards with 12 touchdowns and five interceptions. His 29-4 mark as a starter is second in the FBS among active quarterbacks behind Clemson's Trevor Lawrence (31-1).

Coastal Carolina: RB CJ Marable leads the Chanticleers with 370 yards and five touchdowns. He's also helped the team control the clock and rank 10th in the nation in time of possession (34:06).

Appalachian State has won its last 18 games played in November or December, including a 5-0 mark in bowl games since joining the FBS. ... Coastal Carolina is looking to start 8-0 for the first time since it was in the FCS in 2014 and become the first Sun Belt team to open with that many wins. ... The Mountaineers and Chanticleers are the last two league teams undefeated in conference play. ... Appalachian State has won the past four Sun Belt titles. ... Coastal Carolina has given up just 70 points in its five Sun Belt games this season. ... The Chants have been ranked in the Top 25 the past five weeks. Their current placing at No. 15 is the highest ever for a Sun Belt team. ... The Mountaineers are 0-5 against ranked opponents since 2014. This is the first time they're facing a ranked Sun Belt team.