No. 15 Miami enters as big favorite against Southern Miss 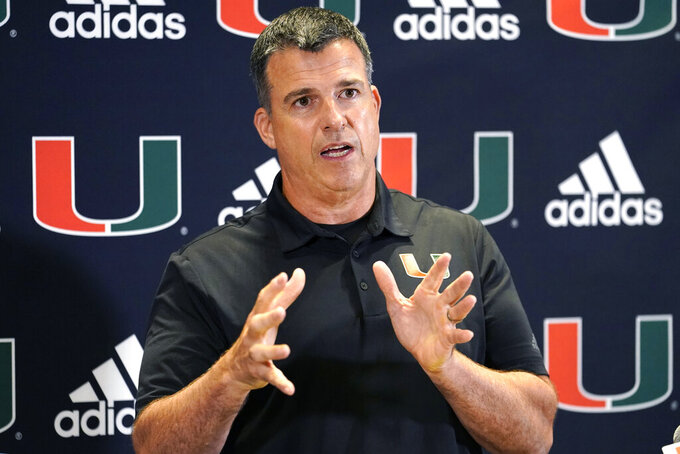 FILE - Miami head coach Mario Cristobal talks with the media at the team's NCAA college football media day, Tuesday, Aug. 2, 2022, in Coral Gables, Fla. Cristobal isn't the only coach who came home to Miami. The Hurricanes have no shortage of assistants and analysts with deep Miami ties who signed on to join Cristobal's first staff at his alma mater. (AP Photo/Lynne Sladky, File)

LINE: Miami by 25.5, according to FanDuel Sportsbook.

A 2-0 record for Miami would keep the Hurricanes ranked and add plenty of intrigue for their Week 3 game at No. 6 Texas A&M. Southern Miss is trying to avoid an 0-2 start.

Southern Miss RB Frank Gore Jr. vs. Miami's defensive front. Gore Jr. is the son of Miami Hurricanes legend Frank Gore, and the Golden Eagles like to use him in all sorts of ways. He'll be a test for a Miami defense that allowed seven plays of 20 or more yards last week against Bethune-Cookman.

Southern Miss: DB Malik Shorts had 12 tackles and an interception in the Week 1 loss to Liberty.

Miami: WR Xavier Restrepo had five catches for a career-high 100 yards against Bethune-Cookman.

To say Miami is heavily favored is an understatement; a $100 moneyline bet on Miami at FanDuel Sportsbook would result in a return of about $3. ... Southern Miss hasn't appeared in the AP Top 25 since the end of the 2011 season. ... Between Sept. 16, 2000, and Nov. 20, 2003, the Golden Eagles went 3-1 against AP-ranked opponents. They're 2-18 in such games since. ... Miami is 4-4 in its last eight games against unranked nonconference opponents. ... Miami didn't punt against Bethune-Cookman in Week 1. The Hurricanes had 11 possessions in the game; nine ended with touchdowns, one ended with a fumble on the Bethune-Cookman 3, and the other ended because time expired in the game. Miami also had a defensive touchdown.

By Mark Anderson 19 minutes ago
an hour ago
By Gary B. Graves 4 hrs ago
4 hrs ago
By The Associated Press 8 hrs ago