No. 15 Oregon hosts Montana to wrap up nonconference play 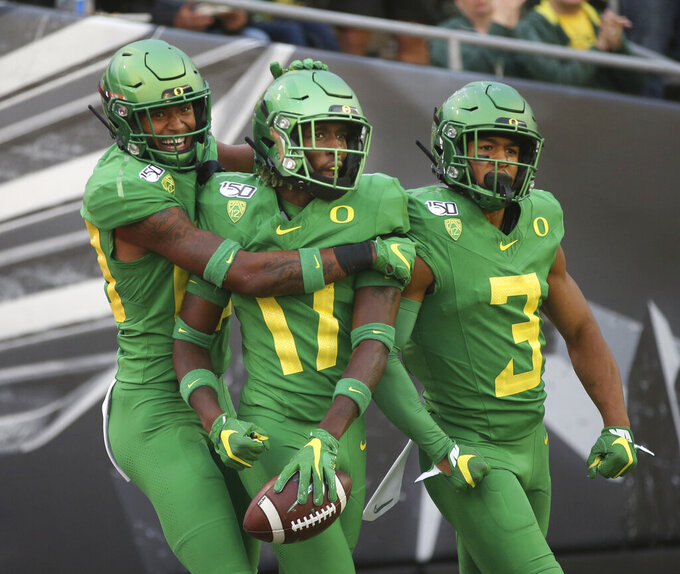 EUGENE, Ore. (AP) — The No. 15 Ducks may have that high-profile loss in the opener to Auburn but the good news is that they haven't dropped a Pac-12 game — unlike a pair of their northern rivals.

Oregon wraps up its nonconference slate Saturday against Montana, the last tuneup before visiting Stanford next week. Early conference games have already impacted the race in the Pac-12 North, with both the Cardinal and Washington suffering league losses. The Ducks were the preseason pick to win the division.

Oregon (1-1) was still trying to work out details before looking too far ahead. Coach Mario Cristobal, who emphasized physical play throughout the preseason, spoke about it again as a point of emphasis heading into the game against the FCS-level Grizzlies (2-0).

Oregon is coming off a 77-6 rout of Nevada that helped get the team back on track after the disappointing loss to Auburn. Each of senior quarterback Justin Herbert's five touchdown passes against the Wolf Pack went to different receivers — in fact, 11 different Ducks scored touchdowns.

Montana opened the season with wins over South Dakota and North Alabama, climbing into the STATS FCS Top 25 at No. 20. The Ducks are the second-highest ranked team the Grizzlies have faced in the modern era after a 63-7 loss to No. 7 Washington two years ago.

While Oregon has Herbert, Montana has fifth-year senior Dalton Sneed, who has thrown for 696 yards and four touchdowns so far this season. A dual threat, he's also run for a pair of scores.

Sneed, who started his career at UNLV, was the Big Sky's newcomer of the year last season, when he led the Grizzlies in both passing and rushing. He threw for 2,723 yards and 22 touchdowns while rushing for 675 yards and two more scores last season.

Sneed has a fan in Cristobal.

"He's a runner, he's a thrower, he's the heart and soul to their team. Very tough, will throw his body around, there's no hesitation in his game whatsoever. The ball is out quick and it's accurate," Cristobal said. "I think he's a special player."

Other things to know about the matchup:

The Ducks lead the series 7-0-1 with all the games played in Eugene. The closest the Grizzlies came was a 14-all tie in 1952.

Montana knows what it's up against Saturday. "We just need to keep progressing and improving and getting better. That's what good teams do throughout a season. And certainly, to go in and play the Oregon Ducks we're going to need a great effort," Montana coach Bobby Hauck said.

Hauk is in his second stint with the Grizzlies. He coached the team from 2003-09 and was brought back prior to the 2018 season.

Oregon not only has one of the nation's top quarterbacks, it has a stout offensive line protecting him. The Ducks' O-linemen have a collective 163 games among them, most in the nation.

"I've seen a lot of Oregon teams over the years, and to me, this is the best offensive line I've seen in an Oregon uniform," Hauck said.

Herbert has thrown for 552 yards and six touchdowns with no interceptions this season.

Montana senior receiver Jerry Louie-McGee needs just three catches to break Raul Pacheco's career record of 192 set in 1998. Louie-McGee has 1,928 career receiving yards. He returned a punt for a 74-yard touchdown last week against North Alabama to give him three punt return TDs for his career and earn him Big Sky Player of the Week honors. And yes, his nickname is Mr. Electricity among the Grizz faithful.

Montana will be paid $650,000 for the visit to Eugene. Hauck was asked about those guarantee games during his Monday news conference.

"With our league having so many members, there aren't many FCS teams in the western U.S. that aren't in our league for the most part," he said. "So, scheduling's difficult and you have to kind of make it work somehow. For us to be able to get regional games and not have to travel to the East Coast to play games is good."

Oregon may see the Ducks debut of graduate transfer Juwan Johnson, a receiver who missed the first two games with a knee injury. Cristobal put the chances at 50-50 earlier this week. Johnson was expected to be one of Herbert's top targets this season.