No. 15 Penn State eager to field deep defense vs Idaho 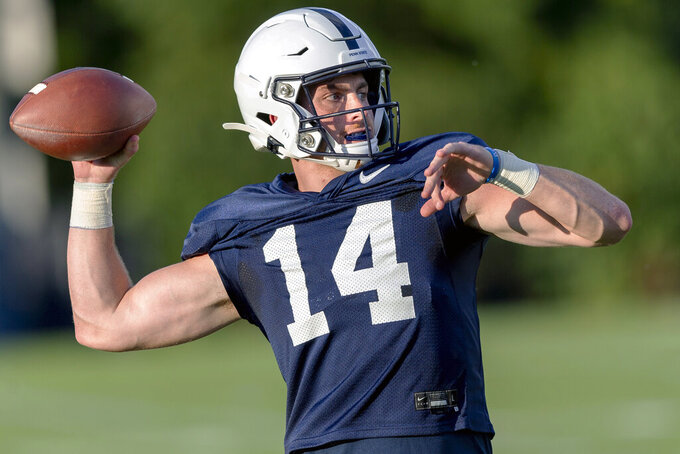 STATE COLLEGE, Pa. (AP) — Sean Clifford is in as good a spot as anyone to evaluate Penn State's defense.

Throughout summer camp, the Nittany Lions have been challenging the young quarterback. Snap after snap, one attribute stands out.

Clifford, who'll start his first game when the No. 15 Nittany Lions host Idaho on Saturday, is looking forward to watching the defense attack the FCS opponent.

Led by defensive end Yetur Gross-Matos and standout linebacker Micah Parsons, the Nittany Lions are young, but also have depth and talent unlike previous seasons under coach James Franklin.

"In years past, we've had pieces that are really exciting," Franklin said. "But in terms of d-line, linebacker and secondary, we feel really good about them right now. Game time is going to be another evaluation."

Defensive tackle Robert Windsor, linebacker Jan Johnson, safety Garrett Taylor and cornerback John Reid are all fifth-year seniors and among the team's most dependable players. Defensive end Shaka Toney, linebacker Jesse Luketa and safety Lamont Wade are the only players who haven't yet started a game. But all three played heavy snap counts in nearly every game last season.

"The two deep, three deep dudes can all move," Reid said. "Every team in the Big Ten is transitioning now where you have linebackers who are running fast, you've got speed off the edge. I think it's been great playing with it all throughout camp."

The Nittany Lions haven't played an FCS team for seven seasons and have opened against just three of them in the past two decades. Penn State has outscored them 151-31.

Idaho coach Paul Petrino was asked this week if it would be a win of sorts to keep the game close.

"You never talk like that," Petrino said. "I think the very first goal is every single guy wants to go out there and play the very best they can play. Every guy wants to go out there and be disciplined, do everything exactly right, assignment wise, have their eyes in the right place, take the right first step, play with great effort, play with toughness. If everyone does that, you always have a chance."

The Vandals will use two quarterbacks, likely throughout the game, but Petrino isn't sure just how the rotation between Mason Petrino and Colton Richardson will shake out. Mason Petrino has the edge experience-wise, playing in 11 games last season to Richardson's six.

Idaho coaches and players will be wary of the speedster wearing No. 1 — wideout K.J. Hamler, Penn State's most dangerous player. The shifty junior led the team with 42 catches for 754 yards last season and chipped in five touchdowns. Hamler added 523 yards on kickoff returns and was close to breaking one for a score on multiple occasions.

He's helped ease Clifford's transition with another great training camp. Hamler capped practice on Wednesday with a nice catch over the middle to split a pair of linebackers, then turned upfield and smoked the scout team safeties clean for an easy touchdown.

Clifford, who's replacing the program's all-time winningest quarterback Trace McSorley, got a call from the Baltimore Ravens quarterback earlier this week who wished him good luck in his first start.

Tommy Stevens, who was expected to battle Clifford for the starting spot but transferred to Mississippi State, also reached out with well wishes.

"When I heard that he won the job down there, that he got elected captain, it just warms my heart," Clifford said.