No. 15 Wake Forest steps out of ACC play to host Army 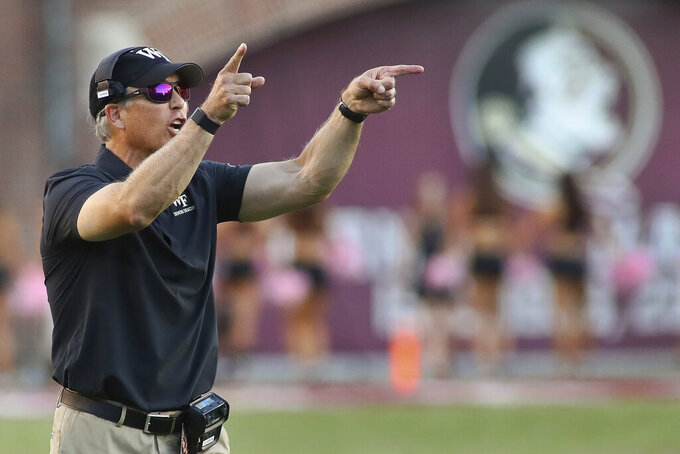 Line: Wake Forest by 16 1/2 , according to FanDuel Sportsbook.

Wake Forest is stepping out of Atlantic Coast Conference play. Dave Clawson's Demon Deacons are coming off a win at Florida State that allowed them to jump up the AP Top 25 poll in what is shaping up to be another strong season. Army, meanwhile, has lost all three games against Bowl Subdivision opponents and is off to its worst start since 2015.

Wake Forest's defense vs. Army's offense. Simply put, the Demon Deacons are determined not to have a repeat of last year's troubles against the Black Knights' triple-option attack. Army racked up 416 yards in a shootout before Wake Forest won 70-56 thanks to its own program-record output for the modern era.

Army: QB Tyhier Tyler. He rushed for 110 yards on 19 carries in last week’s loss to Georgia State. He has rushed for five of his six touchdowns in the past two games, leaving him tied for 14th in the Bowl Subdivision ranks.

Wake Forest has scored 202 points, a team record through the first five games. ... The Demon Deacons are 6-1 when hosting Army. ... The 126 points scored in last season's meeting at Michie Stadium were the most in a single game in Army history. ... This is Army's worst start since losing its first three games in 2015 on the way to a 1-4 record and ultimately a 2-10 finish under Jeff Monken. ... The Demon Deacons have lost just three turnovers so far.