No. 15 Washington in control of Pac-12 destiny against Cal 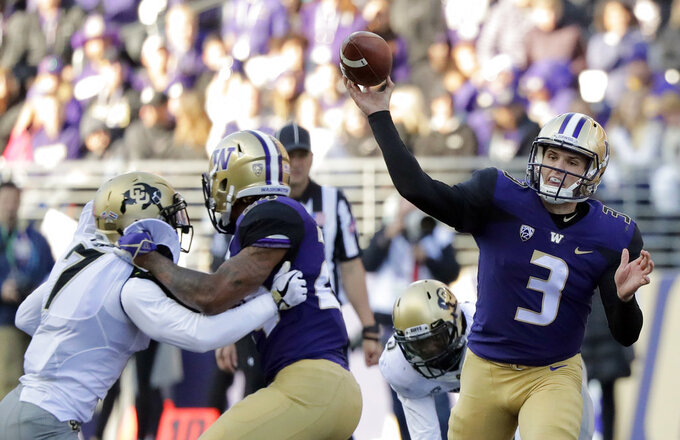 He's still not sure how he feels about it.

But with the No. 14 Cougars beating the No. 19 Ducks, the 15th-ranked Huskies moved back atop the Pac-12 North standings and kept alive their hopes for a second conference title in three years.

"It was weird because I was rooting for Washington State, which is something I've never done before," Gains said. "I literally jumped out of my seat when they scored that last touchdown. It was definitely weird rooting for them but it was cool just getting to watch some college football."

Washington bounced back from an overtime road loss to the Ducks and beat Colorado last week to slip back into first place in the North.

The Huskies (6-2, 4-1 Pac-12) will attempt to hang onto first place against California at Memorial Stadium on Saturday.

That Washington is in position to control its own destiny in the race for the conference championship is quite a change to how the Huskies felt following their 30-27 overtime loss to the Ducks in Eugene less than two weeks ago.

California (4-3, 1-3) is coming off a 49-7 win over Oregon State that ended the Golden Bears' three-game losing streak.

Quarterback Chase Garbers had his best game of the season while racking up career-highs in passing yards (226) and rushing (54).

"We have to build on what we've accomplished and continue to grow as a team," Cal coach Justin Wilcox said. "We've got a great challenge this week. I think the guys are excited for that."

The game between Washington and California is a matchup between the Huskies' career passing leader, Jake Browning, and the conference's top passing defense.

Browning is eighth all-time in passing yards in the Pac-12 and is one win shy of tying Oregon's Marcus Mariota and Stanford's Kevin Hogan for most career conferences wins. Mariota and Hogan had 36 apiece.

Cal counters with a passing defense that is allowing 166.4 yards a game, ninth-best in the nation.

"(Browning) is just so efficient," Wilcox said. "He operates their offense really well and gets the ball to the right guys on time. He's seen a lot of different looks. Just a really good football player."

Here are a few other things to watch for when Washington plays California on Saturday:

GROUND ATTACK: The Huskies are hopeful Myles Gaskin will be able to play against the Bears despite a shoulder injury, although it may be wiser to keep him out one more week and make sure he's healthy for Stanford. Whether Gaskin plays or not, the Huskies are likely to use their deep stable of running backs. Salvon Ahmed, Sean McGrew and Kamari Pleasant combined to help Washington rush for a season-best 201 yards last week in the win over Colorado. None had more than 73 yards, but the trio — along with a few yards from others — more than made up for the absence of one of the top backs in Pac-12 history.

GETTING BACK TO PAT: Cal running back Patrick Laird had a breakout season last year when he rushed for 1,127 yards and eight touchdowns but failed to break the 100-yard barrier in the Bears' first six games this year. That changed last week against Oregon State when Laird ran for a season-high 193 yards on 22 carries while scoring three touchdowns for the second time in his career. Laird has 599 yards on the season. Former starting quarterback Brandon McIlwain is second on Cal in rushing with 446 yards.

TACKLING MACHINE: Burr-Kirven continues to be the top tackler in the country on a defense that's pretty good by itself. Burr-Kirven has 108 total tackles, five more than any other FBS player and 22 more than California linebacker Jordan Kunaszyk, the next-highest player from a Power 5 school. The structure of Washington's defense tries to keep the linebackers clean in order to make plays, but Burr-Kirven has been remarkably efficient in bringing down ball carriers. In his last three games, Burr-Kirven had 15 tackles twice and had 19 tackles in the overtime loss to Oregon.