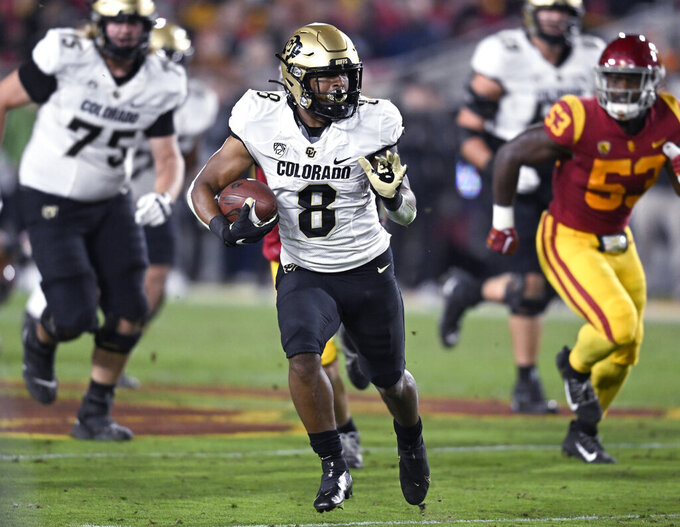 Washington can carry its chance at a spot in the Pac-12 championship game to the final week of the regular season by beating hapless Colorado. The Huskies stunning upset at Oregon threw the race for the Pac-12 title game into chaos, leaving open the possibility of five teams all tying at 7-2 in conference play. The Buffaloes could have their own chaos-inducing moment by knocking off the Huskies. Colorado has lost four straight and given up at least 40 points in each of those losses.

Washington vs. complacency. A massive one over one rival and another rival sitting on the horizon a week from now and a lot at stake. That’s the situation facing the Huskies coming off the win over Oregon and with the Apple Cup at Washington State a week away. The Huskies are clearly a more talented team and even a letdown performance might be enough to get past the Buffaloes.

Colorado: RB Alex Fontenot. The senior rushed for a season-high 108 yards and a touchdown last week against USC, a brief bright spot in an otherwise miserable season for the Buffaloes. It was the fourth 100-yard game of Fontenot’s career, but his first since Nov. 23, 2019 when he rushed for 105 yards in a win over Washington.

Washington: RBs Wayne Taulapapa and Cam Davis. The Huskies running game has been hit and miss this season, but Colorado is next-to-last nationally giving up 227.8 yards per game rushing. Seems like a big opportunity for Washington’s run game to get going.

Washington QB Michael Penix Jr. leads the country in yards passing per game (364.0), and is second in total offense (368.6) and completions per game (28.6). ... Colorado has won the last two in the series, both played in Boulder. The Buffaloes beat the Huskies 20-17 last season the week after Washington had fired former coach Jimmy Lake. ... Colorado ranks 129th out of 131 teams in yards per game allowed at 488. The Buffs are last in the country in scoring defense (41.7) and third-down conversion defense (54.4%).