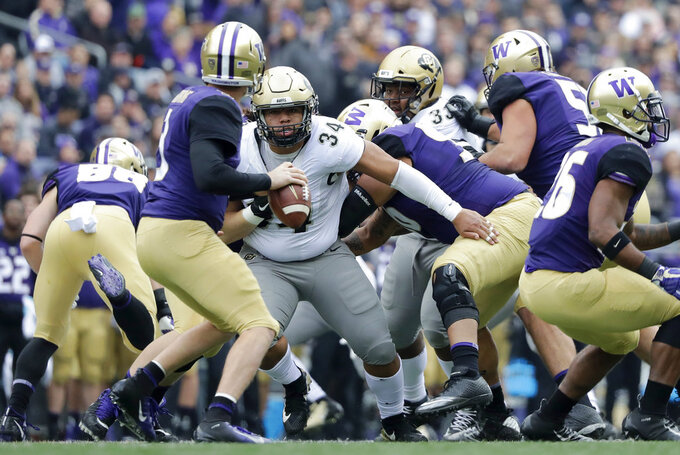 SEATTLE (AP) — Jake Browning and Aaron Fuller saw the pressure Colorado was about to bring and the open field that awaited.

One quick slant connection between Browning and Fuller was finally enough for No. 15 Washington to shake the Buffaloes.

"They were bringing the house. Just had to hold on to it long enough for him to be able to work his move and get open," Browning said.

Browning threw a 26-yard touchdown pass to Fuller on fourth down with less than four minutes remaining, and the Huskies finally pulled away late to beat Colorado 27-13 on Saturday.

Washington's four-year starting quarterback had an unremarkable game up until the Huskies (6-2, 4-1 Pac-12) needed a big play. Leading 17-13, the Huskies kept their offense on the field facing fourth-and-5 rather than trying for a long field goal. Colorado blitzed, but Browning found Fuller open with nothing but the end zone ahead.

"When I saw it was cover zero I brought my best release because I knew I was the first read on that one," Fuller said. "They were doing that a little bit when we got toward the red zone and things like that so when we saw that, it was wide open."

"When we brought four, we never got to him. Not one time. He'd run around and make the plays. When we pressured him, we got him out sometimes, so that's what we did," MacIntyre said.

Salvon Ahmed and Kamari Pleasant both scored on touchdown runs in the first half for the Huskies, who played without starting running back Myles Gaskin due to a shoulder injury. Washington's offense was far from its best but found enough running options in the backfield to control the game on the ground. The stable of Ahmed, Pleasant and Sean McGrew led the way as Washington rushed for a season-high 201 yards.

"It says a lot about our (offensive) line too that they're able to continue to play at a high level and continue to get people covered up in the run game and drive off the ball," Browning said.

Colorado quarterback Steven Montez threw for 144 yards, but the Buffaloes (5-2, 2-2) were shut out and held to 86 total yards of offense in the second half. Washington linebacker Ben Burr-Kirven had 15 tackles and intercepted Montez late in the fourth quarter.

Both teams were without an offensive star. Gaskin, who has been astonishingly durable, missed the first game of his career after aggravating his shoulder injury during a loss last week to Oregon. Gaskin went through pregame warmups in uniform and with his pads on, but when the team took the field for kickoff, he was in sweats on the sideline.

"Myles has been amazing. He's played every game up to this point," Washington coach Chris Petersen said. "To get him this far is pretty good. We'll get him back soon."

The Buffaloes played without Laviska Shenault Jr., the top receiver in the country, due to a toe injury suffered last week in a loss to USC. Shenault was responsible for 11 total touchdowns through six games.

"It goes without saying Laviska is just so special after the catch what he can do with the ball in his hand," Montez said. "Not having him, obviously, didn't help us at all, but I think we definitely have receivers outside of Laviska that are very capable and can make plays as well."

At least initially, the Buffaloes appeared fine without Shenault. Colorado went 80 yards on its first possession, capping it with a 37-yard TD pass from Montez to freshman Daniel Arias for the first catch of his college career.

But that was the most effective Colorado drive of the game. The Buffaloes had just two drives of more than 40 yards and couldn't convert a major opportunity late in the first half. Browning was intercepted by Nick Fisher, who returned the turnover to the Washington 9 with 2:12 left in the first half. But the Buffaloes failed to gain any yardage and settled for a 26-yard field goal from Evan Price, cutting Washington's lead to 14-13 at halftime.

Browning was 15 of 25 for 150 yards, one touchdown and one interception.

Along with Shenault, the Buffaloes were without fellow wide receiver Jay MacIntyre, cornerback Delrick Abrams Jr. and kicker James Stefanou. The absence of Shenault and MacIntyre took 74 receptions and eight touchdown catches from the Buffs' offense — although 60 of those catches and six touchdowns belonged to Shenault.

Colorado: The Buffaloes are fortunate to be in the Pac-12 South, where they should stay in the division race despite the loss. Every team already has one loss and the Buffaloes have a manageable schedule, facing both Washington State and Utah at home next month.

Washington: The Huskies were lethargic early but rebounded nicely from the loss at Oregon. The Huskies still have Stanford and Washington State on the schedule, meaning they will have major influence on the Pac-12 North race.

Colorado's charter flight to Seattle was piloted by Doug Price, the father of Buffaloes' kicker Evan Price and punter Davis Price. The Buffs knew Davis Price, a junior, would kick in the game, but found out during the week that Evan Price would do the placekicking with Stefanou injured.

"He tries to put in a bid to get it and he happened to get this one and it was pretty cool this was the game that Evan was going to be kicking in," MacIntyre said.

Washington: The Huskies travel to California next week.