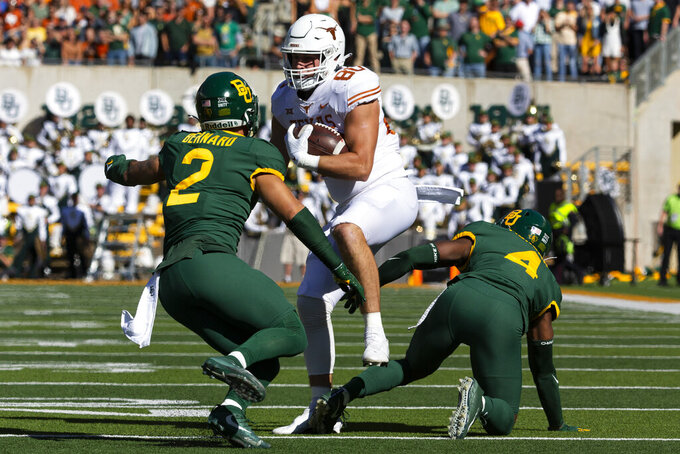 WACO, Texas (AP) — Baylor running back Abram Smith took a quick pitch left, reversed field after spinning away from a defender and scampered for a touchdown.

That play was quite appropriate since the 16th-ranked Bears and Texas are going in opposite directions.

Smith ran for 113 yards with that nifty 32-yard score three plays after an ill-advised fake punt by Texas, following Bears tight end Ben Sims' go-ahead 1-yard TD run earlier in the fourth quarter of a 31-24 win Saturday. Baylor was the third team in a row to overcome a double-digit deficit to beat the Longhorns.

“We got some adversity. It didn’t start off the way we wanted it to. We knew we had to finish strong,” Smith said. “We had to come out and be the team we knew we were.”

“I think getting punched in the face by a really good Texas team, I think was anticipated,” Baylor coach Dave Aranda said. “So it was good that we were able to get our hands back up and throw some punches of our own. I’m proud of this team.”

Texas (4-4, 2-3) was coming off its open date, which followed consecutive losses to No. 4 Oklahoma and No. 15 Oklahoma State in which the Longhorns led by at least two touchdowns before halftime both times.

"That was a tough one to swallow,” first-year Texas coach Sarkisian said. “Any time you lose a game like that, with a little bit of a trend that we’ve had now for three consecutive weeks, that’s tough. It’s tough on our locker room.”

Big 12 rushing leader Bijan Robinson was limited to 43 yards on 17 carries, well below his 132 yards a game average with a 2.5 yard-per-carry that was the lowest in his career. But he did put the Longhorns up 21-10 with his 1-yard TD run on fourth down early in the second half when he followed a pair of blocking nose tackles with a combined weight of 643 yards into the end zone.

After the Longhorns got the ball with 2:07 left and no timeouts, Casey Thompson had four consecutive incompletions. He was heavily pressured on two of the throws.

“You never want to lose. They all suck,” Robinson said. "We work really hard throughout the week to get wins. But some things just don’t go our way.”

Thompson threw two TDs in the first quarter, 10 yards to Joshua Moore and a 63-yarder when he hit Xavier Worthy in stride after the true freshman raced passed sixth-year safety Jarion McVea for a 14-10 lead. Baylor used a little trickery in between for its first score when a reverse handoff to receiver Tyquan Thornton, a former prep quarterback who threw a 6-yard TD to a wide-open R.J. Sneed.

With his 27-yard field goal and three extra points, Cameron Dicker set the Longhorns school record for career points by a kicker at 362, four more than Dusty Mangum had from 2001-04. Ricky Williams is the overall scoring leader with 452 points from 1995-98.

But Dicker passed on one kick he probably should have made. He is also the punter, and on the 4th-and-11 fake in the fourth quarter ran for only 2 yards when he had the option to run, pass or kick.

“If I saw the look again, I would probably check out of it and probably punt the ball,” Sarkisian said. “But when you fake punts and do those kinds of things, you’re rolling the dice.”

Texas: The Longhorns have been outscored 69-23 in the fourth quarter over their past six games. This loss pretty much eliminates any chance for them to make the Big 12 championship game in Sarkisan’s first season. Texas could end up just fighting to break even during the regular season.

Baylor: The Bears were already bowl eligibility, but wrapped up October with three straight wins at home after a 24-14 loss at Oklahoma State to start the month. Baylor had only one penalty, which came after none in its previous game against BYU.

Texas: The Longhorns are on the road again at No. 22 Iowa State.

Baylor: The Bears have their first road game in five weeks, going about 90 miles north on Interstate 35 to play at TCU for the 117th time. That is the only team Baylor has played more than Texas.