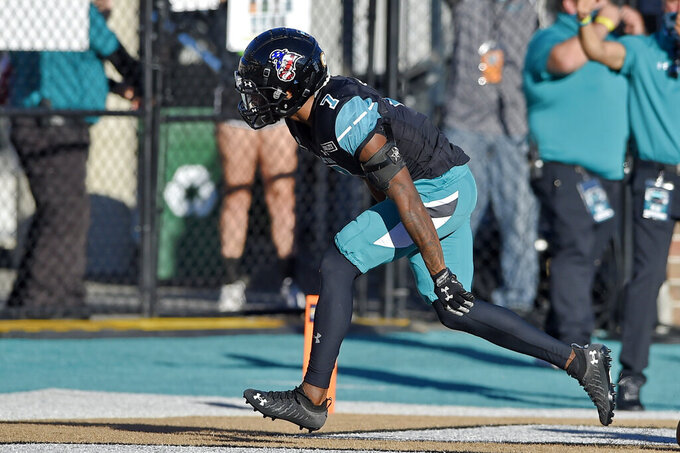 Coastal Carolina's D'Jordan Strong runs an interception back for a touchdown during the second half of an NCAA college football game against Appalachian State, Saturday, Nov. 21, 2020, in Conway, S.C. Coastal Carolina won 34-23. (AP Photo/Richard Shiro) 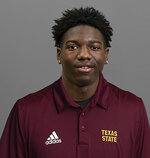 No. 16 Coastal Carolina is on the verge of its first conference title just three seasons after climbing into the Football Bowl Subdivision.

The Chanticleers' current nine-game winning streak began with a 24-21 win over Texas State on Nov. 30, 2019, to close last season. The Chants have the first 8-0 start in Sun Belt Conference history heading into Saturday's visit to Texas State in San Marcos.

The Chants are also 6-0 in the Sun Belt after previously failing to win more than two conference games since joining the league in 2017.

The Bobcats (2-9, 2-5 Sun Belt) enter their season finale in shock and grieving following the slaying of teammate Khambrail Winters. The sophomore defensive back was fatally shot Tuesday in what the San Marcos Police Department said was a drug deal gone wrong. Two men were arrested and charged with capital murder.

“It has been a sad time for Bobcat Athletics and Texas State University,” Texas State coach Jake Spavital said. “My heart goes out to the Winters family and our student-athletes who are grieving.”

The Bobcats were already facing a difficult test against the Chants.

Coastal Carolina is averaging 37.4 points per game and has scored 50-plus against two Sun Belt opponents this season. That is an ominous statistic for Texas State, which has allowed nine of their last 11 opponents to score 30-plus points.

A victory would give Coastal Carolina the Sun Belt East Division championship with two games remaining and maintain its hopes for the school’s first undefeated regular season.

The Chants’ unprecedented success is drawing a lot of attention.

Coastal Carolina coach Jamey Chadwell has reportedly drawn interest from South Carolina, which fired Will Muschamp earlier this month after a 2-5 start in his fifth season.

Caldwell would not confirm or deny the interview or his interest in the position.

“I’ve commented on this a bunch of times and to be honest with you, I’m getting tired of commenting on it,” Chadwell said at a recent news conference. “I’m not going to comment on any more speculation because I’m getting hammered about all these different things. Our sole focus here is working to win against Texas State and clinch the Sun Belt East.”

Texas State quarterback Brady McBride was named Sun Belt Offensive Player of the Week after leading the Bobcats to a 47-45 victory over Arkansas State. He completed 32 of 45 passes for 443 yards and five touchdowns with no interceptions. The five touchdown passes tied a school record.

Coastal Carolina won seven conference titles in the Big South of the Football Championship Subdivision prior to joining the Sun Belt and the FBS.

The Chants can collect their first victory in San Marcos after hosting the first two games of the series, which they split with the Bobcats.

Nicknamed the “Black Swarm,” the Chants’ defense has not allowed a touchdown in the second half of its last four games. Coastal Carolina is holding opponents to 17.3 points per game and 322.8 yards. Opponents have failed to score more than 23 points all season and been shut out once.