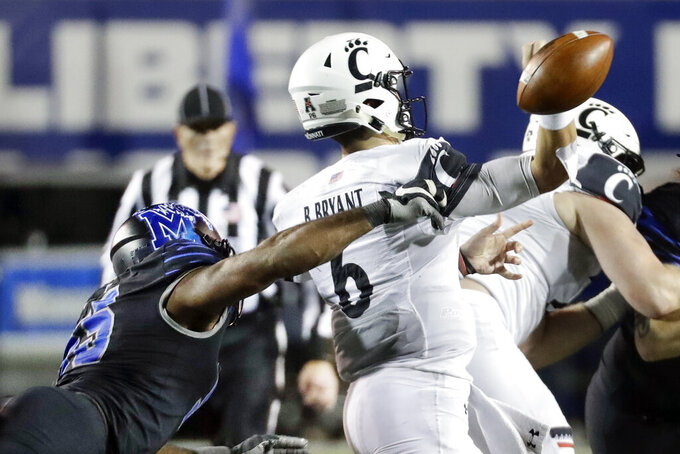 Memphis defensive end Bryce Huff, left, hits the arm of Cincinnati quarterback Ben Bryant (6) as Bryant throws in the second half of an NCAA college football game Friday, Nov. 29, 2019, in Memphis, Tenn. The play resulted in a fumble and Cincinnati recovered the ball. (AP Photo/Mark Humphrey)

The American Athletic Conference title is on the line as these teams meet again in the same stadium eight days apart. If Memphis wins, the Tigers could find themselves headed to the Cotton Bowl. Memphis has never hosted a league championship, while Cincinnati is playing its first conference title game in school history.

Memphis QB Brady White against Cincinnati’s defense. White threw for 233 yards and two touchdowns last week, and the Bearcats sacked him only once with one interception. Cincinnati leads the AAC in scoring defense, giving up just 21.1 points a game. But the Bearcats rank 76th nationally in pass defense and give up 231.6 yards per game through the air.

Cincinnati: QB Desmond Ridder. The sophomore snapped a streak of 23 consecutive starts last week with an injured shoulder that kept him from playing after throwing for just 62 yards in his last start. The time off should help Ridder, who is averaging 166.9 yards passing with 17 TDs and eight interceptions for the season.

This marks the fourth time in Football Bowl Subdivision history that a conference title game is a rematch of a game played the previous week. ... Memphis leads the series 22-13 and has won the last four meetings. The Bearcats' last win in series was 34-21 at Liberty Bowl in 2013. ... Tigers' 34-24 win last week ended Cincinnati's nine-game winning streak. ... Cincinnati RB Michael Warren II has rushed for over 1,000 yards each of the last two seasons. ... Memphis is playing in the title game for the third straight season, the first on the Tigers’ home field. Memphis lost to Central Florida in the last two AAC championship games. ... Memphis is 24-3 at home under coach Mike Norvell and 6-0 this season. ... Memphis had a season-high five sacks in its last game as well as 15 tackles for loss. DL Joseph Dorceus had a career-best four tackles for loss.