No. 16 Michigan hopes to find groove at Illinois 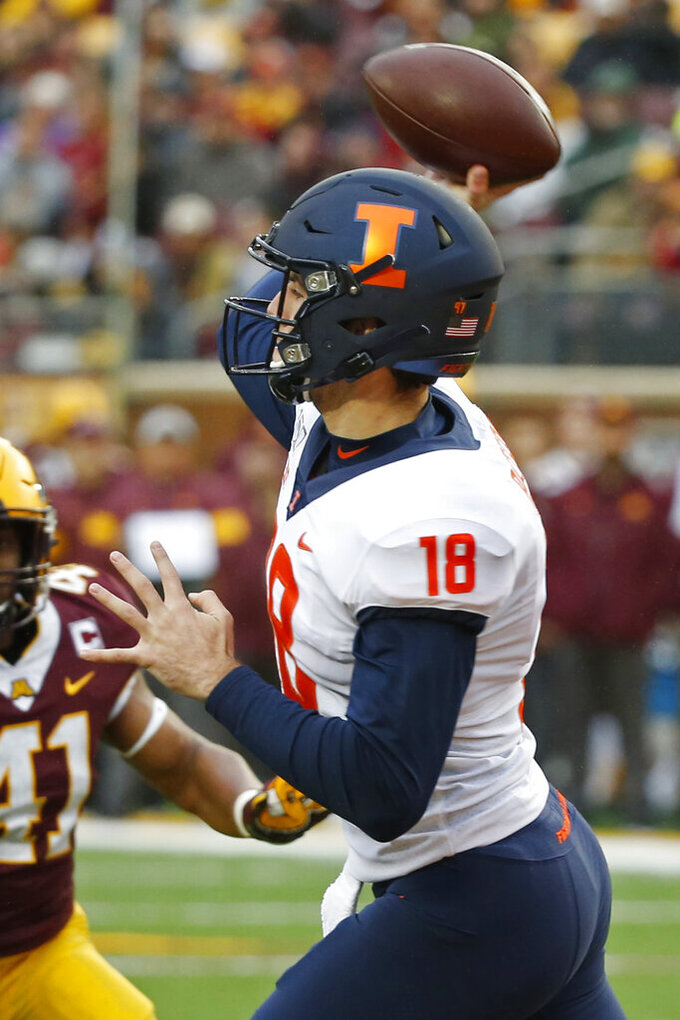 The Wolverines need to get and stay in a rhythm offensively to prepare for tougher tests coming up at No. 10 Penn State and against No. 9 Notre Dame, and No. 3 Ohio State at home. The Fighting Illini would love to end their 23-game losing streak to ranked teams.

Michigan QB Shea Patterson against Illinois' defense. The senior had the third-lowest rating of his career in last week's 10-3 win over Iowa and three of his worst games, statistically, have happened this season.

Illinois: QB Brandon Peters. The Michigan transfer left last week's loss at Minnesota in the first half with an upper body injury. If Peters isn't cleared to face his former teammates, Matt Robinson will likely play.

Michigan: DL Aidan Hutchinson. The sophomore was named the Big Ten Defensive Player of the Week with six tackles, including one sack, against Iowa last weekend. The Michigan defense sacked Iowa quarterback Nate Stanley eight times for a loss of 65 yards.

Michigan is 16-1-1 at Illinois as a ranked team, losing only in 1983. ... The Illini haven't beaten a ranked team since No. 22 Arizona State in 2011 and have only one win against a ranked team since knocking off top-ranked Ohio State in 2007. ... Michigan DE Kwity Paye, who left last week's game with an apparent hamstring injury, ranks among the nation's top 20 players in tackles for losses and sacks. ... Illinois plans to unveil a statue of Hall of Fame linebacker Dick Butkus on Friday outside the main entrance of its football building. Butkus played for the Illini from 1962-64.