No. 16 Mississippi State focuses on details against ULL 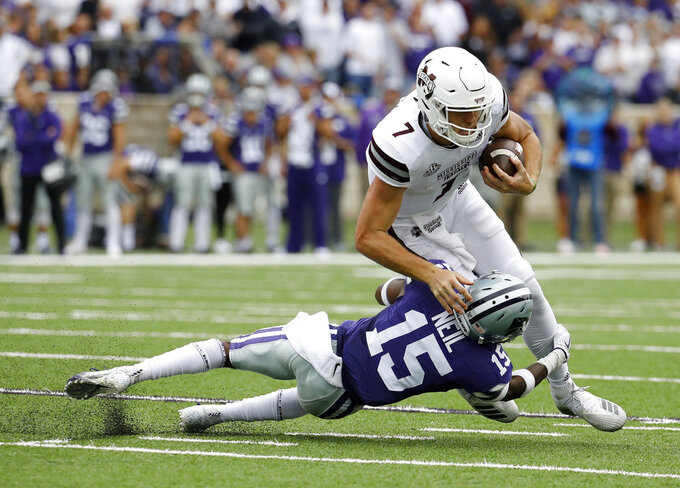 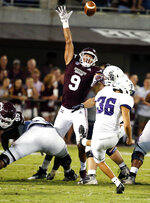 STARKVILLE, Miss. (AP) — Mississippi State's transition to new coach Joe Moorhead looks like it could not be going any smoother.

The 16th-ranked Bulldogs (2-0) have enjoyed relatively easy wins against Stephen F. Austin and Kansas State and hope to keep rolling when they host Louisiana-Lafayette (1-0) on Saturday.

But like all coaches, Moorhead sees room for improvement.

He has been happy with the final scores, but the process for getting there hasn't always been up to his standards.

"We don't want to positively reinforce things that are done incorrectly from a schematics standpoint when a positive outcome occurs," Moorhead said. "We want to make sure we're doing all the things that are necessary, and we are paying great attention to detail."

In its first two games, it was obvious Mississippi State simply had more talent than its opponents. That'll also be the case against Louisiana-Lafayette, which is rebuilding under first-year coach Billy Napier.

That's why Moorhead is interested in the process as much as the results. The Bulldogs' schedule will get more difficult in the coming weeks with a road game at Kentucky on Sept. 22 and a home game vs. Florida on Sept. 29. Moorhead believes the details will matter much more as the season progresses and the competition gets tougher.

The biggest concern might be the passing game, which has been productive but inconsistent. Quarterbacks Nick Fitzgerald and Keytaon Thompson have combined to complete about 42 percent of their passes, which is well below Moorhead's stated goal of 65 percent.

Louisiana-Lafayette has had plenty of time to prepare for Mississippi State. The Ragin' Cajuns beat Grambling 49-17 in the season opener on Sept. 1 and haven't played since.

Here are a few more things to watch when Mississippi State hosts the Ragin' Cajuns:

Mississippi State assistant coach Mark Hudspeth was the head coach at Louisiana-Lafayette from 2011 to 2017 before joining the Bulldogs in the offseason. Moorhead expects Hudspeth's knowledge of the roster to be useful: "It'll be from more of a personnel standpoint because he recruited a majority of these guys."

Mississippi State's Aeris Williams ran for more than 1,000 yards last season, but didn't play one snap in the win against Kansas State last weekend. Moorhead suggested that Williams' preparation for the game wasn't as good as Kylin Hill's and Nick Gibson's. He said on Monday that Williams will have a role going forward. How that develops against the Ragin' Cajuns will be intriguing.

Fitzgerald had a solid game in his return for Mississippi State, running for 159 yards and passing for 154 yards in the Kansas State win. It was his first game since dislocating his ankle in the Egg Bowl last season. Moorhead said Fitzgerald continues to adjust to the new offense: "I don't think there's a lack of comfort, but it's a continued familiarity with the offense, the things we ask him to do and the game repetitions that will help him get more comfortable."

Louisiana-Lafayette quarterback Andre Nunez completed 19 of 22 passes in the win against Grambling, and the 86.4 completion percentage set a school record for a single game. The Ragin' Cajuns running game was also solid in the win: Trey Ragas ran for 142 yards and a touchdown on 13 carries.

Louisana-Lafayette's coach Billy Napier has experience in the SEC. He was the receivers coach at Alabama from 2013 to 2016 and was an offensive analyst for the Crimson Tide in 2011. He also spent several years as an assistant at Clemson.