No. 16 Tennessee looks to continue streak at South Carolina 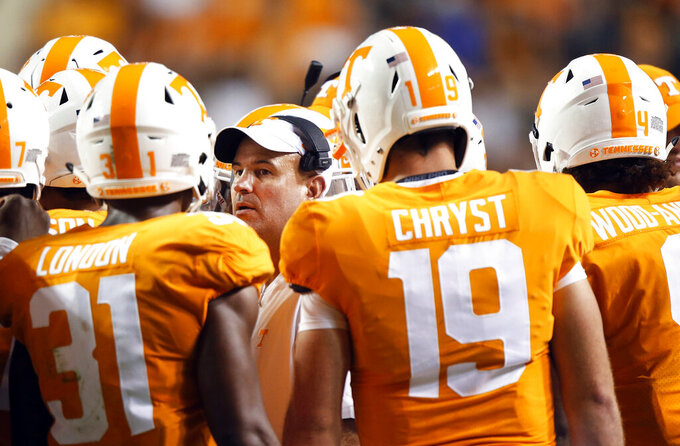 FILE- In this Sept. 22, 2018, file photo, Tennessee coach Jeremy Pruitt, center, talks to players during the second half of an NCAA college football game against Florida in Knoxville, Tenn. A planned scrimmage turned into a scaled-down practice at Tennessee last weekend when the Volunteers were without about 35 players due to COVID-19. Pruitt said seven or eight players were in isolation after being infected and another 28 or so had been quarantined after it was determined through contact tracing they had been exposed to the virus. (AP Photo/Wade Payne, File)

COLUMBIA, S.C. (AP) — Tennessee linebacker Henry To'o To'o is convinced the team's run back to Southeastern Conference prominence wasn't a late-season fluke — and it can continue when the 16th-ranked Vols open the season at South Carolina on Saturday.

The enthusiasm is high on Rocky Top, largely because of Tennessee's fast finish of six straight wins in their 8-5 season.

To'o To'o, who was the Southeastern Conference's second leading tackler among freshman last season, is as excited as anyone about what Tennessee can achieve going forward.

“We know what to expect and how good we can be,” he said. “When we play to our full potential, we can do great things.”

That was apparent last year when the Vols turned things around. And it started last October with South Carolina.

Tennessee trailed 21-17 at the half and appeared to have little momentum as the Gamecocks scored a go-ahead touchdown right before the half.

After that, it was all Vols, who outscored South Carolina 24-0 in the second half of the 41-21 win. Tennessee continued by winning its next five, including rallying to defeat Indiana in the Gator Bowl.

South Carolina coach Will Muschamp said the second-half fade was due in part to a faltering offense that could not be consistently productive down the stretch. He brought in former Colorado State head coach Mike Bobo as the team's offensive coordinator.

Muschamp said the team has more offensive success at fall camp than he's had in a while “as far as being productive, being aggressive.”

South Carolina received state permission to have about 20,000 fans at the stadium, about a quarter of its newly reduced capacity of 77,559 due to offseason construction to increase luxury areas.

“I definitely think it;s going to be an advantage for us, especially on offense,” he said.

Other things to watch when No. 16 Tennessee plays South Carolina:

The Volunteers have both their top running backs available with senior Ty Chandler and Gray. The sophomore says he struggled early to adapt to how quickly holes close up in college — something he figured out as he ran for 246 yards in a win over Vanderbilt. Gray also recovered an onside kick and scored the game-winning TD as the Vols rallied to beat Indiana the Gator Bowl.

Tennessee's six game win streak is the fifth-longest streak in the Football Bowl Subdivision and third-longest in the Power 5. It’s also the longest in the SEC East, and the Vols have won four straight in SEC play.

The Gamecocks could have quarterbacks all over the field much of the time. While graduate transfer Hill will make his first start behind center, ex-passer Joyner is at receiver. A backup widout on South Carolina's two-deep is highly regarded freshman quarterback Luke Doty, also the third-string passer.

Not only did Muschamp lure defensive line coach Tracy Rocker away from Tennessee this offseason, he also hired Drew Hughes to be South Carolina’s director of player personnel after holding that job the past two years at Tennessee. Pruitt has Muschamp’s nephew, Robert, as an equipment graduate assistant.