No. 16 Texas A&M wraps up home schedule vs. Prairie View 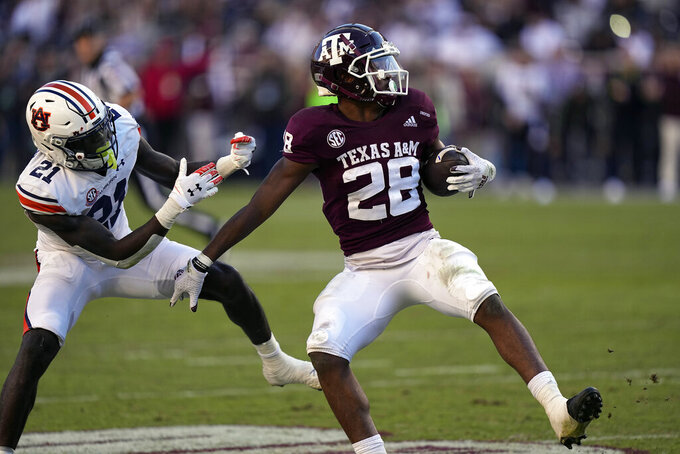 COLLEGE STATION, Texas (AP) — Texas A&M coach Jimbo Fisher continually preaches to his team the importance of playing the same every week no matter the opponent.

As the 16th-ranked Aggies (7-3) look to bounce back from a loss to Ole Miss on Saturday against FCS school Prairie View A&M (7-2), Fisher was able to illustrate his point with an example that hit close to home.

His alma mater, tiny Samford University, threatened to pull off an upset against fellow SEC foe Florida last week, leading by as many as 14 points before the Gators rallied for a 70-52 victory.

“My point is whether you’re playing the Pittsburgh Steelers, the Green Bay Packers, Alabama, Georgia, Florida, Prairie View, Samford, whoever it is, you practice the same, you play the same, you do the same,” Fisher said. “And people say, ‘Well, that’s not true.’ It is true. The great teams and the great players do not matter who they play. It’s how they play and how they prepare.”

Star defensive lineman DeMarvin Leal was asked about this idea.

“Just like Jimbo says, our opponent is faceless,” he said. “It’s all about us and what we do and how we approach the game throughout the week.”

When told that some of his players had been repeating his mantra in interviews, Fisher was pleased.

“I’m very glad they said that,” he said. “You made me just feel good.”

The Aggies take a break from SEC play against the Panthers before wrapping up the regular season next week at LSU. Their 29-19 loss to Mississippi last week snapped a four-game winning streak that began with their upset of Alabama.

The Aggies will look for Zach Calzada to get back on track this week after throwing a season-high two interceptions without a touchdown in last week’s loss. He hasn’t thrown a TD pass in the last two games after piling up seven in the previous three games combined.

While Prairie View coach Eric Dooley knows no one is giving his team a chance to win this weekend, he’s certainly not approaching the game with that mindset.

“I don’t think there’s ever been a coach that just wants to make it through the game, we want to win,” Dooley said. “We’ve come a long way, and I think it’s great for the community to play Texas A&M at Kyle Field.”

The Panthers are coming off a loss to Alcorn State, but are having a great season and need a win next week over Mississippi Valley State to reach the SWAC title game. For now, they will focus on the Aggies, an hour's drive up the road.

“I want to get back into the mindset of being 1-0,” Dooley said. “We have a chance to make some corrections and move forward after last weekend’s loss... this is an opportunity for the players to play on a big stage, this is a great moment for them.

While Calzada has had an up-and-down season, running backs Isaiah Spiller and Devon Achane have led A&M’s offense. The duo has helped the Aggies average 186.30 yards rushing a game.

Spiller leads the team and ranks third in the SEC with 914 yards rushing, Achane is sixth with 816 yards and the two have combined for 12 rushing touchdowns.

Achane is coming off his fourth 100-yard rushing game of the season after finishing with 124 yards and two scores last week. Spiller also had 100 yards rushing last week, running for 113 yards for his sixth 100-yard performance this year.

Prairie View QB Jawon Pass, a graduate transfer from Louisville, ranks third in the SWAC in yards passing with a career-high 2,326 yards. He has 16 TD passes with seven interceptions this season.