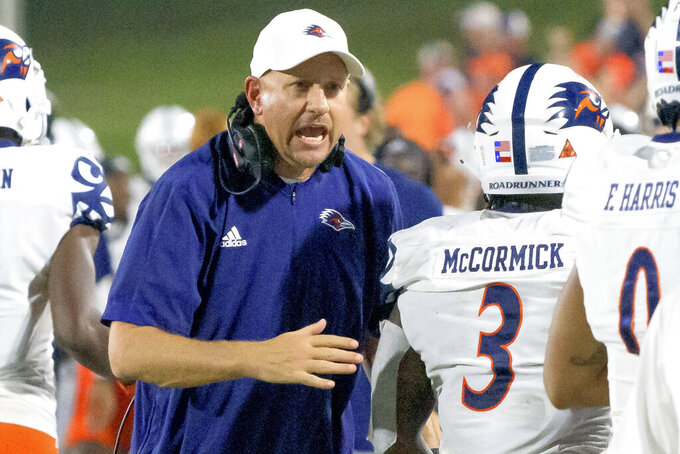 SAN ANTONIO (AP) — No. 16 UTSA and coach Jeff Traylor have agreed to a contract extension worth $28 million that runs through the 2031 season.

The school announced Sunday that Traylor’s annual salary will average $2.8 million. The 54-year-old longtime Texas high school coach is 15-5 in two seasons at Texas-San Antonio. His name had come up as a possible candidate for the recently opened head coaching vacancy at Texas Tech.

“Jeff saw something special at UTSA when he first expressed interest in this job and we likewise knew we had someone special when we hired him to take over our program,” UTSA athletic director Lisa Campos said in a statement.

The Roadrunners (8-0) are in the midst of the program’s best season since joining the top tier of Division I college football in 2012. They currently lead Conference USA and are ranked for the first time.

“I say this all the time, but this game is about the players and they are the reason we are in this profession to begin with,” Traylor said in a statement. "This is exactly why we have chosen to make this announcement today. We should all be talking about what they have accomplished this season, they are making history every week.”

UTSA also recently announced it would be moving from C-USA to the American Athletic Conference though an exact date for the transition is still to be determined.

Traylor is now likely to be the coach to guide UTSA through that transition. A native of Gilmer, Texas, east of Dallas, spent 15 years coaching Gilmer High School before joining Charlie Strong's staff at Texas as an assistant Texas in 2015.

He spent a season three seasons an assistant at SMU and Arkansas under Chad Morris before replacing Frank Wilson in December 2019 at UTSA.

The new contract includes a buyout of 60% of all compensation if Traylor is terminated without cause.

If Traylor were to leave before or during year one of the deal, the school would be owed $7.5 million. The buyout drops to $7 million during year two and then by an additional million over each of the next three years.

The deal also calls for a salary pool for assistant coaches and support staff of about $3 million a year.