No. 17 Cincinnati can clinch AAC East by beating Temple 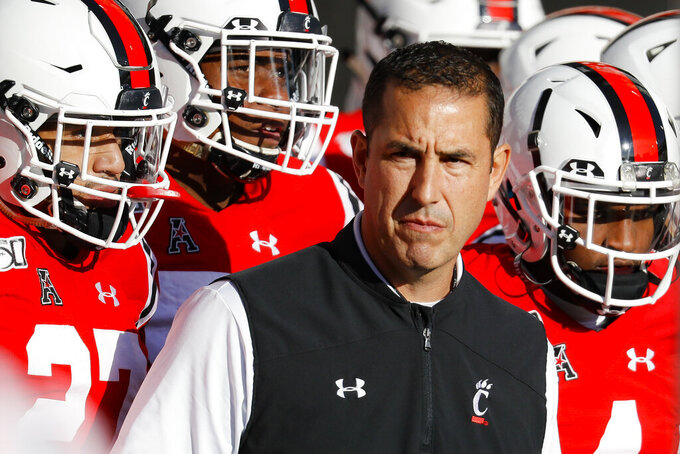 Cincinnati head coach Luke Fickell takes the field with his players before the first half of an NCAA college football game against Connecticut, Saturday, Nov. 9, 2019, in Cincinnati. (AP Photo/John Minchillo)

The Bearcats can clinch the AAC East and a spot in the conference’s title game. The Bearcats also would host the game if they beat Temple and Memphis. A loss to the Owls would scramble things.

Temple’s front four vs. Cincinnati’s offensive line: The Owls lead the FBS with 59 quarterback hits. Defensive end Quincy Roche had 12 tackles — including an AAC record six for losses — along with three sacks and a fumble recovery during a 29-21 win over Tulane last week. Last season, the Owls limited Cincinnati’s dual-threat quarterback Desmond Ridder to 111 yards passing and nine rushing while handing the Bearcats their first loss of the season.

Temple: Roche has 6½ sacks in the last two games. He also has batted down three passes, tied with teammate Khris Banks for most in the AAC. The Owls lead the league with 10 passes batted away.

Temple has won the last four in the series. ... The Bearcats have won 12 in a row at home since a loss to the Owls in 2017. ... WR Jadan Blue had 12 catches for 131 yards and a TD. He has at least 10 catches and 100 yards in two straight games. ... Temple has nine 100-yard receiving games this season from three players combined, a school record. ... Temple’s offensive line leads the conference in preventing quarterback pressures. ... Cincinnati has rallied from behind in the second half for wins at East Carolina and South Florida. ... Josiah Deguara needs nine catches, 99 yards receiving or three TDs to set Cincinnati records in those categories for a tight end. ... Ridder was 9 of 18 for only 78 yards in the win at South Florida. He ran 12 times for 18 yards.