No. 17 Cincinnati wants to avoid another close call vs UConn 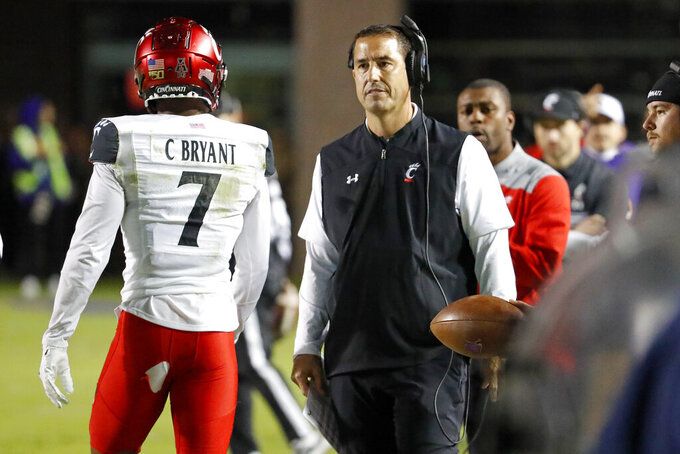 Cincinnati head coach Luke Fickell, center, reacts to a pass interference call against his team during the first half of an NCAA college football game against East Carolina in Greenville, N.C., Saturday, Nov. 2, 2019. (AP Photo/Karl B DeBlaker)

CINCINNATI (AP) — The Cincinnati Bearcats trailed by a dozen points in the fourth quarter on the road against an overmatched opponent, a predicament that felt rather familiar.

The No. 17 Bearcats pulled another one out, rallying for a 46-43 victory at East Carolina. And they came away thinking this must stop.

Cincinnati (7-1, 4-0) remains the only team with a perfect record in American Athletic play despite some nervous moments against teams it was expected to handle easily. Coach Luke Fickell has talked to the Bearcats about their focus as they head into another game as an overwhelming favorite.

"If you don't come to play, you don't have your best, then you put yourself at risk no matter who it is you're playing," Fickell said. "There's a lot of danger in that."

The Bearcats took the inside track in the league race by knocking off UCF on Oct. 4. In the last two games, they've struggled to beat Tulsa and East Carolina, neither of which has won a league game .

UConn completes the trilogy. Coach Randy Edsall is curious to see how the young Huskies fare against one of the AAC's deepest teams.

"We're not a physical enough football team," Edsall said. "We're not, because we're not strong enough yet. And that's part of the process with all these kids that we have. But, either you're tough or you're not. It's hard to make somebody who is not tough, tough."

The Bearcats don't want another one to become tougher than needed.

Freshman cornerback Ahmad Gardner has a pair of interception returns for touchdowns, including a 62-yarder at ECU that helped spark the Bearcats' comeback.

"Throughout the season, he's done a lot of things to earn respect and playing time," Fickell said. "As we make the stretch run, he's going to see a lot more of it."

Cincinnati's No. 17 ranking is its highest since 2009, when the Bearcats had an unbeaten regular season and made it to No. 4 in the poll.

Cincinnati has won the last two games in the series, including 49-7 last season. The Bearcats have won all eight games against UConn at Nippert Stadium. Overall, the Bearcats have won 11 in a row at home since November 2017. Edsall's young team will be in tough surroundings.

"You can't be like a cat sipping milk, always looking to see if somebody's coming," Edsall said.

UConn has lost 16 straight conference games. The Huskies have dropped 23 of their last 24 games against FBS teams.