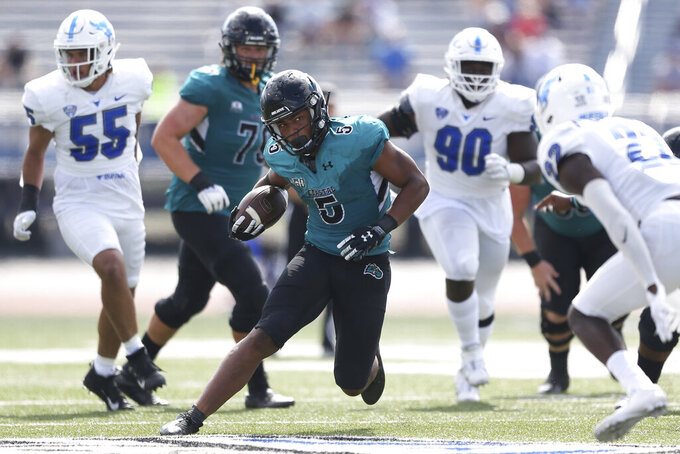 Coastal Carolina running back Shermari Jones (5) runs for a first down during the second half of a NCAA college football game against Buffalo in Buffalo, N.Y. on Saturday, Sept. 18, 2021. (AP Photo/Joshua Bessex)

Line: Coastal Carolina by 36 1/2, according to FanDuel Sportsbook.

Coastal Carolina expects to start 4-0 for a second straight season. The Chanticleers were the surprise of college football in 2020 by going 11-1 and have carried their strong play into this season. UMass is looking to snap a 14-game losing streak.

UMass QB Brady Olson vs. Coastal Carolina's pass defense. Olson is a freshman who debuted two games ago against Boston College and threw for 214 yards and three TDs. He passed for 288 yards and two touchdowns last week against Eastern Michigan. Coastal Carolina is seventh nationally against the pass, allowing less than 133 yards a game through the air. It's yet to yield a passing TD.

UMass: LB Avien Peah. He's playing his sixth season for the Minutemen. He has had a fumble recovery and has made seven tackles each of the last two games.

Coastal Carolina: RB Shermari Jones. The senior has rushed for more than 100 yards in two of his first three games this season. He had 100 yards and two touchdowns against The Citadel and 145 yards and a TD at Buffalo last week.

Coastal Carolina has won its last nine games at home, a run that includes victories over BYU last December and Kansas two weeks ago. ... UMass has not won since defeating Akron 37-29 on Sept. 28, 2019. ... Chanticleers head coach Jamey Chadwell led the team for the first time when he was interim coach (coach Joe Moglia was on medical leave) in 2017 with a victory over UMass. It was the program's first victory as a FBS school. ... The Minutemen have five fumble recoveries this season, tied for the second most in the country. ... Coastal Carolina has scored on 20 of its 30 possessions this year. ... Chants QB Grayson McCall leads the FBS by completing 78% of his throws this season. He's passed for six touchdowns and just one interception.