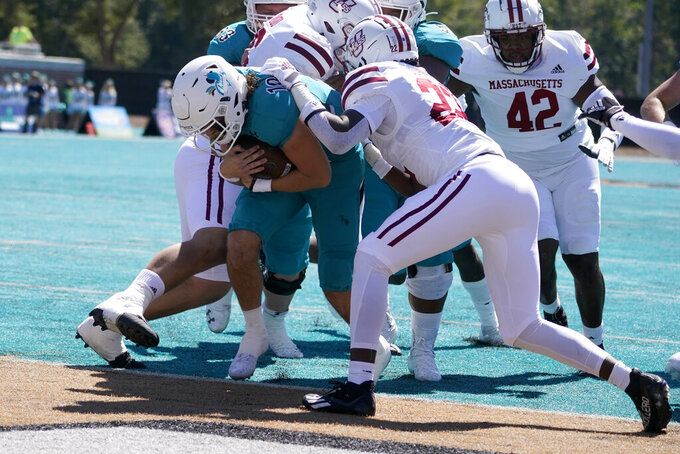 CONWAY, S.C. (AP) — Coastal Carolina's defense loves watching the Chanticleers' offense operate, as long as it's on game days and not in practice.

Both sides of the ball stood strong Saturday as the 17th-ranked Chants scored on eight of nine possessions for a 53-3 victory that sent UMass to its 15th consecutive loss.

Chants linebacker Silas Kelly said the strength of the defense directly correlates to the offense since they go after each other at practice.

“Those guys are insane,” Kelly said. “They're really, really good. And seeing them at practice has a lot to do with it, too. Hopefully, when you play against guys like that, it makes games a little bit easier.”

Things looked easy for the Chants in this one as they opened 4-0 for a second straight season. The offense piled up 558 yards and the defense held a shutout until midway through the fourth quarter.

“As I said, playing together helps,” Kelly said. “We just want to have a lot of fun out there.”

Grayson McCall threw for two touchdowns and ran for a third. Jaivon Heiligh had five catches for 118 yards receiving, the fifth time in the past six games he's surpassed the century mark. Backup receiver Tyson Mobley a touchdown catch and another on the ground.

“Everybody on the offense is making plays,” Mobley said. “That's just the way it is.”

The Chanticleers have won 15 of their past 16 games. They also cranked things up after a subpar offensive showing in 28-25 win at Buffalo last week.

McCall was again at the center of things. He opened the scoring with a 3-yard run and added scoring passes of 25 yards to Isaiah Likely and a 23 yards to Heiligh. By then Coastal Carolina led 36-0 and the only drama left was whether the defense could claim its first shutout since a 51-0 win over Georgia State last season.

Coastal Carolina had little trouble igniting its offense, especially with the help from Minutemen special teams.

A high snap on a UMass punt led to a block as George Georgeopoulos tried to kick it away as he scrambled. That set up McCall's scoring run.

His team down 20-0, Georgeopoulos couldn't get a handle on a snap deep in his end zone that went out of bounds for a Coastal safety.

“The most disappointing thing was we weren't able to take advantage of our opportunities,” UMass coach Walt Bell said.

In all, the Chanticleers scored on all five of their first-half possessions for a 36-0 lead. They added two touchdowns and a field goal the next three times they had the ball. The run ended on the UMass 2 when Coastal Carolina knelt down with 25 seconds left and the clock ran out.

UMass: The Minutemen continued their struggles in their FBS journey and showed how far they have to travel to compete with a ranked Group of Five opponent. UMass couldn't match up in any phase of the game with costly mistakes on offense, defense and special teams.

Coastal Carolina: The Chanticleers shook off a so-so performance last week with a dominant outing heading into Sun Belt Conference play next week. McCall and the offense were efficient and effective, even without leading rusher Shermari Jones out with turf toe.

It's hard to tell where Coastal Carolina will wind up when the Top 25 is released Sunday. The Chants did what they were supposed to, yet that doesn't often lead to big moves up the rankings.

Coastal Carolina has not allowed a passing TD through four games. The Chants came into the game seventh in the country against the pass at 132 yards allowed and should stay about where they are after giving up 130 in the win over UMass.