No. 17 Cyclones go for 3rd straight win when K-State visits 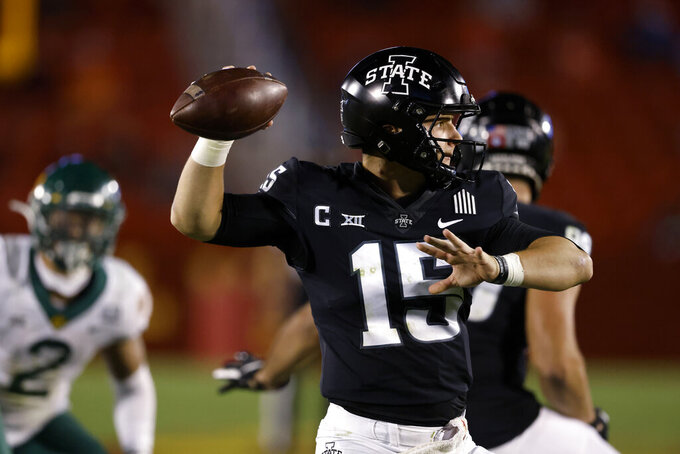 The Big 12-leading Cyclones have a half-game lead over Oklahoma State in a tightly bunched conference race, and a third straight win would move them a step closer to their first league championship game. The Wildcats would fall two games behind with two games to play if they lose.

Kansas State's defensive line vs. Iowa State's offensive line. The Wildcats must get pressure on Brock Purdy, and that will be no easy task considering Iowa State has given up a league-low eight sacks in seven games. Wyatt Hubert has 5.5 sacks and 17 in his career, which is first nationally among non-seniors. Drew Wiley has 3.5 sacks and seven other K-State players have at least one.

Kansas State: RB Deuce Vaughn has averaged under 3 yards per carry in his last two games. He needs to get going to help out K-State's defense. The Wildcats' offense has gone three-and-out, or worse, on 10 of their last 25 series.

Iowa State: Purdy will be looking for a better start after throwing three interceptions in the first half against Baylor two weeks ago. He rebounded with three touchdown passes after half as the Cyclones came from behind to win.

The Cyclones have clinched an above-.500 conference record for a fourth straight season for the first time since 1928. ... ISU's Breece Hall is the only player in the nation with 1,000 yards rushing. He's averaging 147 per game with 13 touchdowns. ... The Cyclones are averaging 6.7 yards per play against Big 12 opponents, the best mark in the conference. ... Kansas State (Will Howard and Vaughn) and Georgia Tech are the only teams that start true freshmen at quarterback and running back. ... The Wildcats are going for a third road win for the first time since 2017. ... “Farmageddon,” a nod to the schools' agricultural roots, will be played for the 104th consecutive season, making it one of the longest uninterrupted series in FBS history.