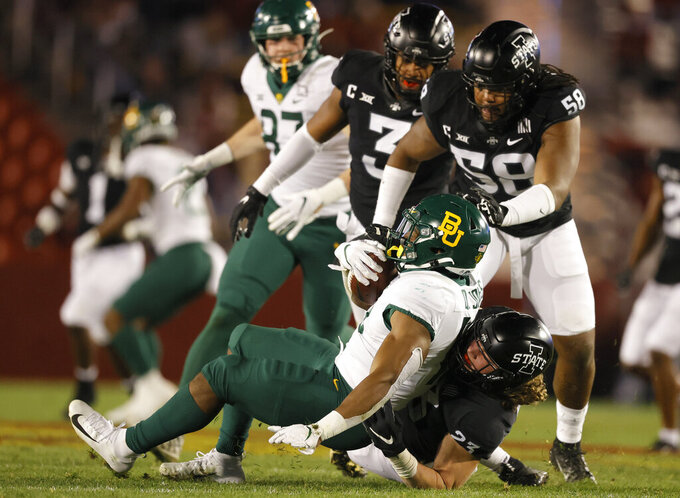 AMES, Iowa (AP) — Brock Purdy never panicked, and now No. 17 Iowa State can continue its pursuit of a historic season.

The Cyclones' quarterback passed for three touchdowns in the second half after throwing three interceptions in the first, leading the Cyclones to a 38-31 come-from-behind victory Saturday night.

“I think we've been in many situations where we get down,” Purdy said. “We understand we have to have poise in this game and in this conference."

The Cyclones (5-2) are 5-1 in conference play for the first time in the program’s 128-year history and are first in the Big 12 by a half-game. Their most recent league championship came in 1912, and it was a shared title.

Breece Hall went over 100 yards rushing for the seventh straight game, finishing with 133 and two touchdowns. He also caught a TD pass.

The Cyclones won for the first time since 2012 when committing four turnovers. Baylor scored its first 24 points off Iowa State turnovers, the last coming when Greg Eisworth muffed a punt.

“It's hard to lose any of them,” Baylor defensive back Jalen Pitre said. “Today we lost, going out there and getting up and letting it slip out of our hands.”

Mike Rose sealed the victory when he intercepted Charlie Brewer’s pass in the end zone with 57 seconds left.

“I'm more of just a zoned-out guy in that type of coverage,” Rose said. “In a sense, it came right to me.”

Purdy completed 11 of his last 14 passes after the pick-six.

The Bears have lost four straight since beating Kansas in their opener.

“For our guys to start fast was a real positive,” Baylor coach Dave Aranda said. “To see them stay in the fight, it shows the character of our team.”

“I thought it was a really special football game for our football team.” Campbell said. “Really proud of our team.”

Trestan Ebner’s 58-yard catch-and-run pulled Baylor within a touchdown before Rose's third interception of the season in the final minute.

“We've got a group and they refuse to let anybody hang their heads," Campbell said. "I've said multiple times I think this is a special group.”

Baylor: The Bears were left without their top two running backs when Craig Williams suffered what appeared to be a serious leg injury in the first half. John Lovett was already out with an injury. The Bears also lost linebacker Terrel Bernard to a shoulder injury in the second half but he was able to return.

The victory could vault No. 17 Iowa State into the top 15. Just five previous Cyclone teams have climbed that high after seven games, with the most recent coming in 2017, coach Matt Campbell’s second season.