No. 17 Houston looks to extend streak to 10 against Memphis 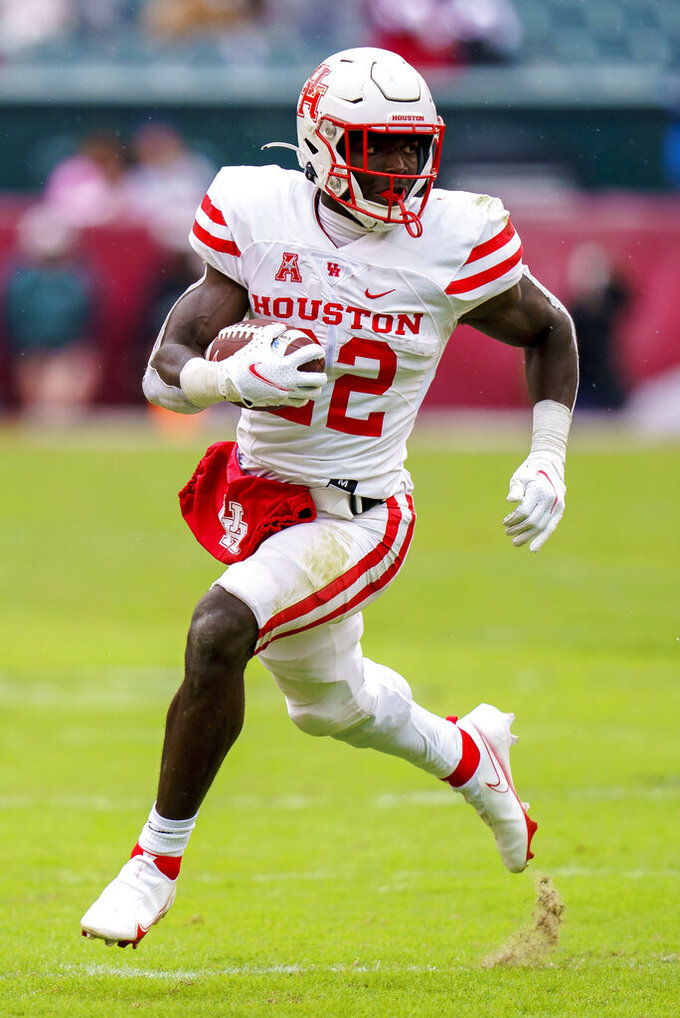 Houston running back Alton McCaskill (22) runs with the ball during the first half of an NCAA college football against Temple, Saturday, Nov. 13, 2021, in Philadelphia. (AP Photo/Chris Szagola)

Line: Houston by 8 1/2, according to FanDuel Sportsbook.

Houston can win its 10th straight game and secure the Cougars’ first 10-win season since 2015. Houston is also looking to go 8-0 in conference play for the second time in school history and first since 2011. Memphis is seeking to become bowl eligible for an eighth straight season. Memphis’ seven straight seasons with a bowl is the longest in the AAC. The Tigers are seeking to extend their win streak over Houston to six games.

Houston's defensive line vs. the Memphis offense. The Cougars rank third nationally in third down conversion percentage defense at 27.6%, fifth in team sacks at 3.4 per game, sixth in total defense at 290.5 yards per game and eighth in rushing defense at 97.8 yards per game. The Tigers rank 18th nationally averaging 303.3 yards passing and 22nd with 450.5 yards in total offense.

Memphis: WR Calvin Austin III. The redshirt senior not only is Memphis’ leading receiver, he ranks 12th nationally with 1,026 yards receiving, and he’s 12th averaging 102.6 yards a game. He leads the AAC in yards receiving, yards receiving per game and receptions per game with 6.7. But he was limited in the loss to East Carolina by what coach Ryan Silverfield called a “significant” injury.

Houston: RB Alton McCaskill. He set a single-season program record for rushing touchdowns by a freshman with his 14th touchdown last Saturday against Temple. McCaskill’s 14 touchdowns are eighth nationally. His 15 total touchdowns rank second among true freshmen in program history. For the season, McCaskill has 732 yards rushing.

Houston QB Clayton Tune has completed 69.8% of his passes this season for 2,448 yards and 21 touchdowns. Tune has not thrown an interception in five games. ... Houston is the sixth bowl-eligible team Memphis has played this season, tying the Tigers for 10th in that category this season. Memphis is 2-3 in those games, beating Mississippi State and SMU. ... The Cougars are fourth nationally with two fumbles lost this season and rank second nationally in turnover margin. ... Memphis freshman QB Seth Henigan ranks 11th in total offense averaging 321 yards per game.