No. 17 Memphis No. 18 Cincinnati play to host AAC title game 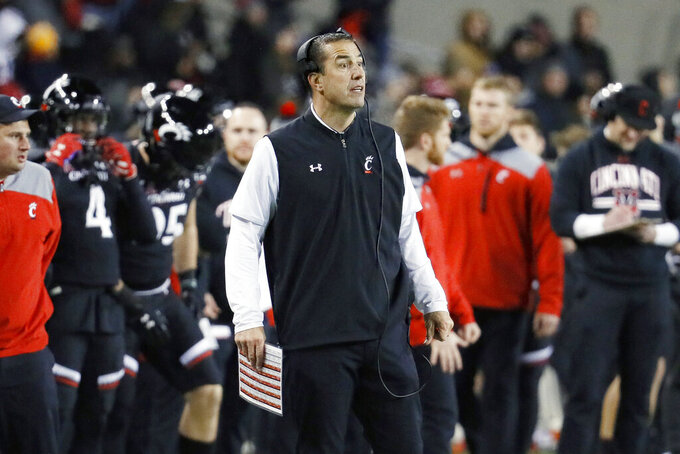 The 17th-ranked Memphis Tigers have a chance to do something for the first time in program history.

The chance to host the American Athletic Conference championship will be on the line Friday when the Bearcats visit Memphis for the first time since 2015. The winner also has a shot at possibly playing in the Cotton Bowl as the best of the Group of Five leagues this season.

Memphis (10-1, 6-1, No. 18 CFP) can win a third straight West Division title and set up a rematch with Cincinnati, the East Division champ. A loss would leave Memphis hoping Houston beats Navy to clinch the West in a tiebreaker.

“You can’t allow it to,” Norvell said. “We have to throw everything we have into this opportunity, so we can discuss that next week. Right now it’s all about this one game, this opportunity.”

A 10th straight victory will allow Cincinnati (10-1, 7-0, No. 19 CFP) to host the title game at Nippert Stadium where the Bearcats have won 13 straight.

Memphis has beaten Cincinnati three straight and four of the last six with the teams sharing the league title with UCF in 2014. The Tigers lost in the title game each of the past two years on the road at UCF, including last season when they blew a 38-21 halftime lead. Memphis is undefeated at home this season.

“We’re taking it I think to new heights, and we got an opportunity to do that with something that’s never been done here come Friday,” Norvell said.

Some other things to know about Friday’s Cincinnati-Memphis showdown:

If Memphis and Cincinnati play again next week for a title, it won’t be the first time that’s happened. Middle Tennessee beat UAB in the regular season finale last year only to lose the rematch and the Conference USA title. In 2017, Fresno State took the first game only to see Boise State win the Mountain West Conference championship. Stanford won in UCLA in 2012 before winning the Pac-12 title on its home field.

Cincinnati hasn’t lost since being routed by Ohio State in September, and the Bearcats are the only AAC team undefeated in league play. That doesn’t mean it’s been easy for the Bearcats. They had to rally from 12 points down in the fourth quarter to beat East Carolina 46-43 on a late field goal. They rallied from 10 down in the second half to win at South Florida on another last-second field goal.

They edged Temple 15-13 last week needing to block an extra point returned for 2 points that wound up the winning margin. Coach Luke Fickell says that’s a mark of the AAC’s strength.

“We've kind of gone through the ups and downs,” Fickell said. “I think emotionally, it's taken a little bit of a toll. But again, these guys find a way to endure. Whether or not it's the prettiest thing in the world, we find a way to win."

Both teams are really good at running the ball: Cincinnati ranks 34th in the nation averaging 197.3 yards per game and Memphis at 35 with 196.2 yards per game. Michael Warren II leads Cincinnati with 939 yards rushing and 11 touchdowns, while Memphis now has plenty of options with senior running back Patrick Taylor back from an injury that kept him out most of the season.

Cincinnati quarterback Desmond Ritter has been limited by an injured throwing shoulder the past two games. He threw for just 78 yards against South Florida, then managed only 62 yards passing with an interception despite playing the whole game against Temple. Fickell said Ridder couldn’t practice early last week.

Memphis quarterback Brady White has 30 TD passes this season and is completing 67.1 percent of his passes. He has the Tigers averaging 292 yards passing, which is 20th in the nation. Cincinnati comes in ranked 69th against the pass, allowing 231.5 yards a game.

By John Zenor 32 minutes ago
By Pete Iacobelli 60 minutes ago
an hour ago
By Ralph D. Russo 5 hrs ago
By Ken Powtak 18 hrs ago