No. 17 Minnesota aims to stay unbeaten, as Maryland visits 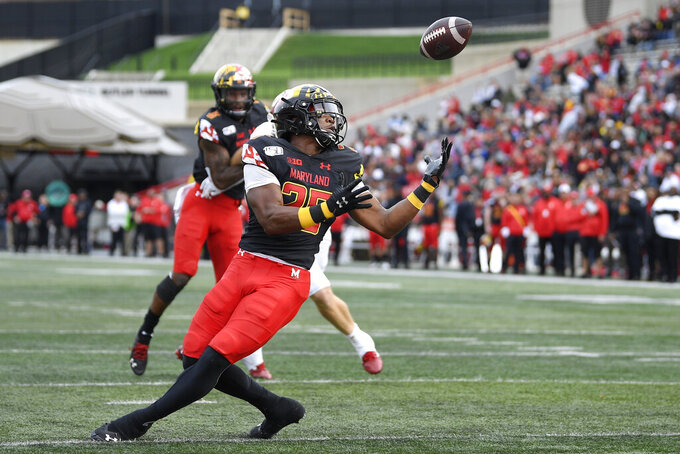 Maryland defensive back Antoine Brooks Jr. (25) makes an interception during the first half of an NCAA college football game against Indiana, Saturday, Oct. 19, 2019, in College Park, Md. (AP Photo/Nick Wass)

Minnesota, which has its highest ranking in the AP poll since it was No. 13 on Oct. 3, 2004, has not started a season 8-0 since 1941. The Gophers were national champions that year. Most importantly, because Wisconsin plays at No. 3 Ohio State on Saturday, Minnesota has an opportunity to take a two-game lead in the West Division with four games to go. Maryland, with games against Michigan and at Ohio State looming next, could use some momentum under first-year coach Michael Locksley.

Minnesota linebackers Thomas Barber and Kamal Martin vs. Maryland running backs Javon Leake and Anthony McFarland Jr. The Gophers are seventh in the Big Ten with an average of 122.3 rushing yards allowed per game. Martin, the team's leading tackler, left in the third quarter last week at Rutgers with a leg injury coach P.J. Fleck indicated would make him a game-time decision. The Terrapins are third in the conference with an average of 207.1 rushing yards. Leake and McFarland are tied for third in the Big Ten with eight total touchdowns, despite McFarland missing the previous game against Indiana with a sprained ankle.

Maryland: Safety Antoine Brooks Jr. has been credited with 42 solo tackles, the most in the conference.

Minnesota: Safety Antoine Winfield Jr. leads the Big Ten with four interceptions, including one he returned for a touchdown against Rutgers. Winfield suffered a season-ending foot injury in the first quarter last year against Maryland, which went on to win 42-13 behind 315 rushing yards.

Maryland has forced at least one turnover in 19 straight games, the second-longest streak in the FBS behind Syracuse (21). ... Despite being shut out by Penn State on Sept. 28, the Terrapins have scored 249 points, the second-highest total through seven games in school history behind the 2001 team. ... The Gophers beat Illinois, Nebraska and Rutgers by a combined score of 116-31, the first time since 1935 that they've won three consecutive conference games by 20-plus points.