No. 17 Pitt hosts WVU in return of "The Backyard Brawl" 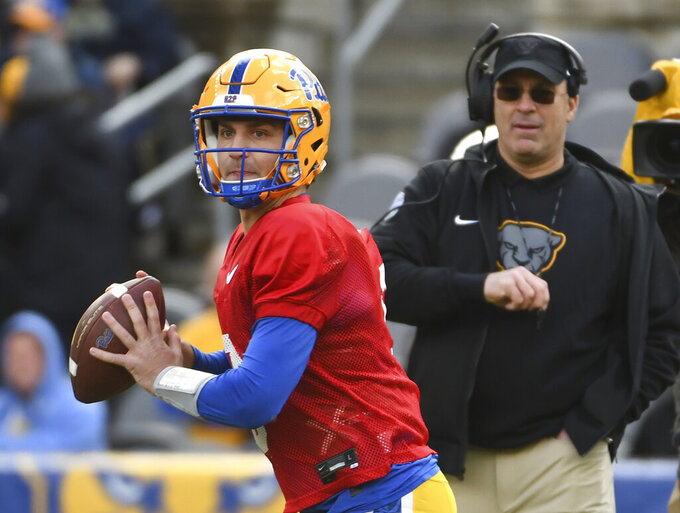 Line: Pitt by 7½, according to FanDuel Sportsbook.

Local bragging rights as “The Backyard Brawl” returns following a 10-year hiatus. The series took a break after the previous meeting in 2011, a byproduct of both schools leaving the disintegrating Big East for safer (and more lucrative) landing spots in the ACC (Pitt) and Big 12 (West Virginia). The Panthers won the ACC for the first time last fall behind Heisman Trophy finalist Kenny Pickett. Things have been bumpier for the Mountaineers and coach Neal Brown, who is just 17-18 since arriving in Morgantown.

West Virginia's offensive line vs. Pitt's front seven. The Panthers have developed a reputation as one of the most consistently aggressive defenses in the nation during coach Pat Narduzzi's tenure. Pitt has racked up 151 sacks over the last three years, tops in the FBS over that span. Calijah Kancey is the latest Pitt defensive lineman carving out a resume that likely will land him in the NFL. The Mountaineers' best chance at pulling off the upset will depend on a veteran line keeping Kancey and company at bay and Georgia transfer JT Daniels upright at quarterback.

West Virginia: Daniels. The well-traveled Daniels is hoping his third collegiate team will be his last after stops at Southern California (2018-19) and Georgia (2020-21), where he served as the backup to Stetson Bennett as the Bulldogs won the national title last season. Daniels and offensive coordinator Graham Harrell have a long relationship dating to their time with the Trojans and Daniels is hoping that familiarity will help him get up to speed quickly.

Pitt: QB Kedon Slovis. Slovis actually took over for Daniels at USC after Daniels was injured early in the 2019 season. He held the job for the better part of three years before transferring to Pitt over the winter. Slovis has big shoes to fill after Pickett's terrific 2021 season. While the offense will be without WR Jordan Addison — who left for USC in the spring — there are plenty of options at Slovis' disposal and he'll get a chance to play behind a line returning all five starters.

While Pitt still holds a lopsided lead in the 127-year-old series, the Mountaineers have won 14 of the last 21 meetings, including the final three before the rivalry went on hiatus following the 2011 season. ... First-year Pitt offensive coordinator Frank Cignetti Jr.'s father served as West Virginia's head coach from 1976-79. Cignetti's brother Curt played quarterback for the Mountaineers in the early 1980s. ... The Panthers enter the game ranked to start a season for the first time since 2010. ... Pitt is 6-1 in season openers under Narduzzi.

20 minutes ago
By Ralph D. Russo an hour ago
By Mark Anderson 2 hrs ago
3 hrs ago
By Gary B. Graves 6 hrs ago