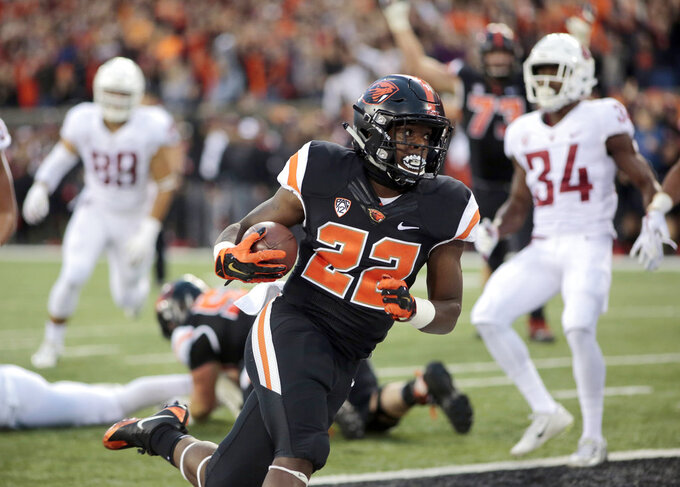 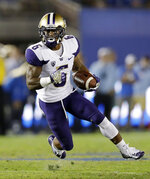 SEATTLE (AP) — For all the hype that surrounded No. 17 Washington before the year began and the disappointment of being out of the College Football Playoff conversation by midseason, the Huskies still have a legitimate shot at a more than acceptable consolation prize.

The Rose Bowl still carries significant meaning in these parts. And with two more victories — beginning Saturday against Oregon State — the Huskies would find themselves in the Pac-12 title game playing for a chance to go to Pasadena as the conference champion.

That sounds straightforward but navigating the next few weeks won't be easy. Facing the Beavers would seem the easiest of Washington's three tasks. That's followed by a showdown against No. 8 Washington State in the Apple Cup on Nov. 23 to likely decide the Pac-12 North title. And if the Huskies win both, they'd still have to get past the Pac-12 South champ in the conference title game on Nov. 30.

While the quest for a division title will take priority, Saturday is also a chance for Washington (7-3, 5-2 Pac-12) to say farewell to two of its most successful seniors in their final home game: quarterback Jake Browning and running back Myles Gaskin.

Browning is the school's all-time leader in yards passing, touchdowns, pass efficiency, and has won 36 of the 49 games he's started despite facing criticism from fans who have expected more. Gaskin appears recovered from a shoulder injury that kept him out of games earlier in the season and needs 271 yards the rest of the way to become the ninth player in FBS history to have four 1,000-yard seasons in their career, according to the school.

They're two of the most important players to have come through Washington during coach Chris Petersen's tenure, part of a highly successful senior class.

"I hope that they are really focused on the game and not too wrapped up in the last one at Husky Stadium, because we have a lot more ball to play and practice here," Petersen said.

Oregon State (2-8, 1-6) has enjoyed few highlights most of the season — its comeback win over Colorado the lone exception — but may be in position to give the Huskies headaches thanks to familiarity. The matchup will be a return to Seattle for head coach Jonathan Smith after spending the previous four seasons as Washington's offensive coordinator.

"I have some fond memories of that place," Smith said. "It's a great place to play a football game. Our kids will be excited to play there. We have some kids from that area who are looking forward to playing back home."

Here's what else to know about the 102nd all-time meeting:

SUPER FRESHMAN: One of the few upsides in Oregon State's season has been the debut of freshman running back Jermar Jefferson. He needs just 53 yards rushing to topple Jacquizz Rodgers' freshman record at Oregon State. Rodgers rushed for 1,253 yards in 2008; Jefferson has 1,201. Jefferson is the eighth player in school history to top 1,000 yards, but just the second freshman. Jefferson hasn't scored a rushing touchdown since Oct. 6 when he had four TDs in a loss to Washington State.

TACKLE MACHINE: Because of the Huskies' bye last week, linebacker Ben Burr-Kirven lost his spot as the top tackler in the country. He's now third with 134 tackles on the season but should have plenty of chances to regain the top spot and finish the season as the national leader with the Huskies likely to have three and possibly four more games. Burr-Kirven is averaging more than 13 tackles per game.

RUN AWAY: Oregon State's defense has been mostly forgettable this season. The Beavers are giving up 542.8 yards per game, ranking next to last in the country. Of that number, 271 yards per game are coming on the ground. Every team they've faced this season has rushed for at least 100 yards against the Beavers, even pass-happy Washington State. That's not good when facing Gaskin and the rest of Washington's talented backfield.

GETTING HEALTHY: The one upside to Washington's late bye week is the chance to have a mostly healthy roster for the final stretch. The Huskies could see the play time of tight end Hunter Bryant increase and there's a chance left tackle Trey Adams could return for the final few games and not jeopardize his intent to return for a fifth-year in 2019. Adams has missed the entire season with a back injury.

Washington may also get cornerback Jordan Miller back after missing the past two games.