No. 18 Memphis looks for 4th straight Saturday at Houston 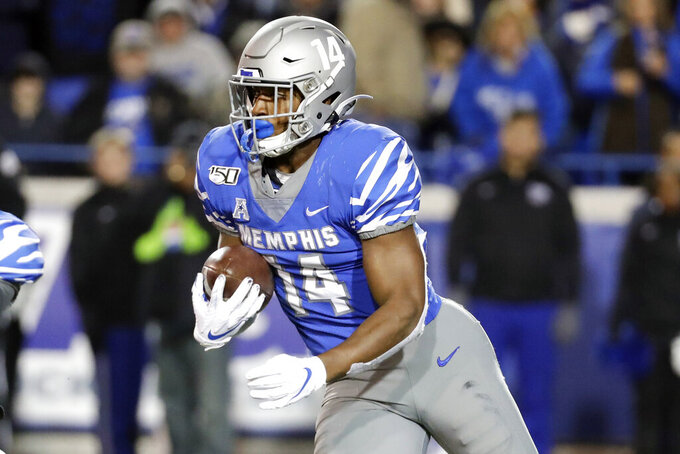 Memphis' Antonio Gibson runs 78 yards for a touchdown against SMU during the second half of an NCAA college football game Saturday, Nov. 2, 2019, in Memphis, Tenn. Memphis won 54-48. (AP Photo/Mark Humphrey)

The Tigers look for their fourth straight win as they chase first-place SMU and second-place Navy for the lead in the West Division of the American Athletic Conference.

Memphis WR Antonio Gibson vs. Houston's pass defense. Gibson ran for 97 yards and a touchdown and had a career-high 130 yards receiving against SMU for his second 100-yard receiving game of the season in Memphis's last game. The Cougars have struggled against the pass and are ranked 122nd in the country by allowing 289.6 yards passing a game.

Memphis: RB Kenny Gainwell. The freshman ranks eighth in the nation and first in the American with 1,067 yards rushing. He has six 100-yard rushing games this season including a season-high 209 yards rushing against Louisiana-Monroe.

Houston: DB Grant Stuard. The junior is sixth in the American with eight tackles a game and he's tied for second in the league in solo tackles with 50. Stuard has three games this season with at least 10 tackles.

Memphis has won three in a row against Houston. ... The Tigers have 53 wins since 2014, ninth-most in FBS and lead AAC in that span. ... Memphis coach Mike Norvell is 34-15 in his fourth season and tied Billy J. Murphy as fastest Memphis coach to 34 career wins in 48 games. ... The Cougars are 5-3 against at home against ranked opponents since 2014. ... Houston's last win over a ranked opponent came in a 57-36 win over No. 17 USF last season. ... Houston has had five different players with at least one 100-yard rushing game this season. ... K Dalton Witherspoon has made his last 10 field-goal attempts and is 15 of 18 this season. ... WR Marquez Stevenson is tied for first in the nation with four receptions for 60 yards or more this season. ... Houston is third in the nation with four blocked kicks this season with three of those blocks coming on punts.