No. 18 Miami seeks to halt bowl slide against Oklahoma State 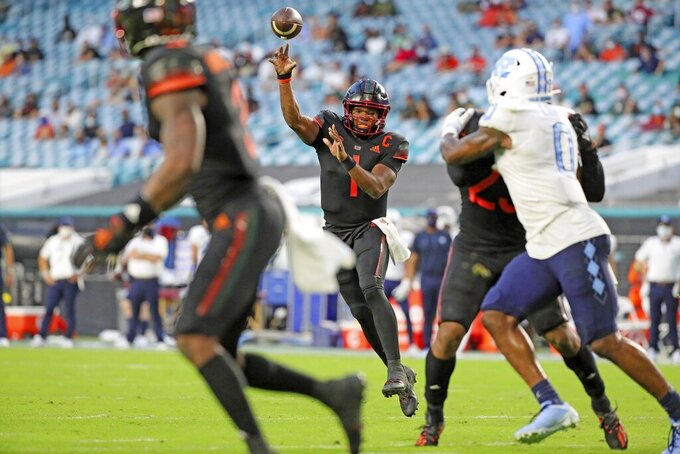 Miami quarterback D'Eriq King (1) throws a touchdown pass to wide receiver Mike Harley (3) during the first half of an during an NCAA college football game against North Carolina at Hard Rock Stadium In Miami Gardens, Fla, Saturday, Dec, 12, 2020. (Al Diaz/Miami Herald via AP) 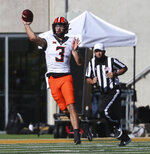 The Cowboys seek their 10th bowl victory in their 15th consecutive bowl appearance. The Hurricanes look to end a three-game bowl losing streak.

Miami’s offense vs. Oklahoma State’s defense. The Hurricanes average 432.6 yards per game, slightly more than the Cowboys (427.7). But OSU is good at getting off the field, ranking second nationally in third-down defense at .263. A pass rush that tied for 12th with 3.2 sacks per outing helped, which challenges the Hurricanes' pass protection to improve after allowing 2.9 per game this season.

Oklahoma State: WR Tylan Wallace has 53 receptions for 877 yards and six touchdowns and is a semifinalist for the Biletnikoff Award as the nation’s top receiver after being a finalist in 2018. His 2,512 career yards receiving rank third among active FBS players and he has 11 contests with at least 100 yards over the past two seasons. Wallace recently earned his second All-Big 12 Conference first-team selection in three seasons.

Miami: QB D’Eriq King was the ACC’s No. 4 passer this season at 257.3 yards per game, throwing for 22 touchdowns against five interceptions. The graduate transfer from Houston helped guide the Hurricanes to as high as seventh in the AP Top 25 in October before a loss to then-No. 1 Clemson. He’s a contender for several national awards.

Oklahoma State is 19-11 in bowl games and has the fifth-highest rate (63%) among programs with at least 20 appearances. ... Last year’s 24-21 loss to Texas A&M in the Texas Bowl halted Oklahoma State's three-game postseason winning streak. ... Oklahoma State won its last visit to Orlando, topping ACC member Virginia Tech 30-21 in the 2017 Camping World Bowl. ... Miami will play in its eighth consecutive bowl and is 20-23 overall. ... The Hurricanes finished third in the ACC, with games against Duke postponed and Wake Forest canceled because of COVID-19-related issues. ... Miami is making its fourth Orlando bowl appearance and earned its last postseason win there in 2016 against West Virginia (31-14) in the 2016 Russell Athletic Bowl.