No. 18 Michigan faces difficult opener at No. 21 Minnesota 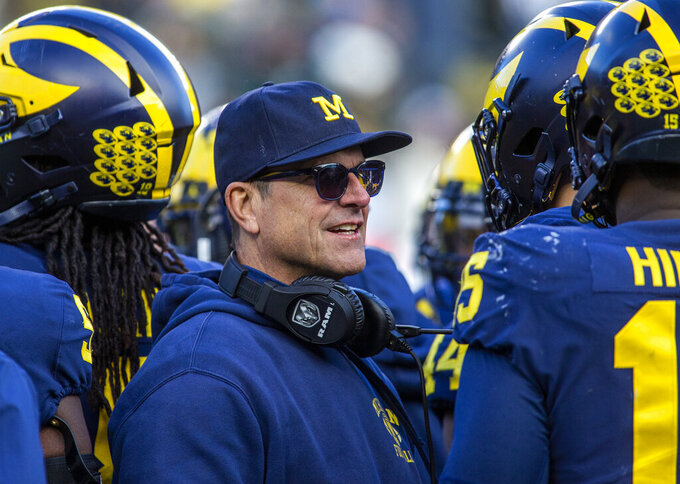 FILE - In this Nov. 16, 2019, file photo, Michigan head coach Jim Harbaugh huddles with his players on the field during a time out in the fourth quarter of an NCAA college football game against Michigan State in Ann Arbor, Mich. Jim Harbaugh enters his sixth season as Michigan's coach with just two years left on his contract, adding another layer of interest in the 18th-ranked Wolverines as they kick off the season this week at No. 21 Minnesota. (AP Photo/Tony Ding, File)

MINNEAPOLIS (AP) — Michigan hasn't left Minnesota with a loss since 1977.

This time, the only fans in the seats will be family members of the players, drastically reducing the disadvantage for the visitors.

This is a much different Gophers team than most of those that wilted in the past against the Wolverines, though. This pivotal sixth season with coach Jim Harbaugh for the storied program will finally begin in difficult fashion at No. 21 Minnesota on Saturday night.

Long before the 18th-ranked Wolverines can worry about that next swing at rival Ohio State, they must contend with the Gophers, who won 11 games last season, a mark that Michigan hasn't hit since 2011. The Wolverines will again boast a stout defensive line and a deep group of running backs, but there's plenty to prove in order to end their 16-year drought without a Big Ten title.

“I’ve never seen any team I’ve been a part of here come together as much as we have,” senior linebacker Josh Ross said. “I’m ready to show everybody how good we actually are.”

The Gophers got a lot better when star wide receiver Rashod Bateman had his eligibility reinstated last month, after he initially opted out of the season due to health concerns amid the COVID-19 pandemic. The connection between him and quarterback Tanner Morgan ought to be one of the best in the conference, if not the country.

“Tanner has just grown as a leader throughout this whole quarantine," running back Mohamed Ibrahim said. "He has really good control of this whole team.”

First, the Big Ten canceled nonconference games. Then the whole season was off, for about a month, until more stringent virus protocols fueled another revision and this late October start. Regardless of how the conference got here, both teams are eager to get going.

This is the first time a ranked Minnesota team will open against an opponent also appearing in the AP poll since 1968, when the Gophers faced USC.

“We were all at home for months. We weren’t even able to be around each other. So to start the year off, to be able to play football, is something that we’re very grateful for,” Morgan said.

Now the network is returning on Saturday for a second straight home game, and this one is the 104th meeting between Michigan and Minnesota with the Little Brown Jug at stake. All but eight of the 65 power conference programs have been picked at least once, with Illinois, Maryland and Rutgers the lone Big Ten teams yet to host.

The virus precautions will take some luster off the scene, with fans not permitted to attend the filming and thus eliminating the eye-catching cardboard sign holding tradition that clever students clamor to take part in around the country.

“It’s an event. It’s a spectacle. It’s a chance for us to be able to put our program, our university, our state on display in front of the whole country,” Minnesota coach P.J. Fleck said.

Michigan junior quarterback Joe Milton is expected to make his first start, hoping four new starting offensive linemen can give him enough time to throw to an inexperienced group of receivers.

“He’s made a lot of great strides,” Harbaugh said. “Really good command of the offense and savviness — and a lot of talent.”

Dylan McCaffrey, the brother of Carolina Panthers All-Pro running back Christian McCaffrey, decided not to return for a fourth year after falling behind Milton on the depth chart. The 6-foot-5, strong-armed Milton played sparingly as a backup the previous two seasons behind Shea Patterson.

Minnesota's defensive line has a new look, too, with defensive tackle Micah Dew-Treadway the only incumbent starter. Junior Boye Mafe will take the lead at defensive end, following the departure of Carter Coughlin, one of four players in last year's defensive lineup who became NFL draft picks. Maye, who had three sacks in a backup role last season, credited the coaching staff for his progress.

"They pushed me to go harder with the weights and do more,” Mafe said. “I think it’s translating over to the field. If you ask me how I feel about my body now compared to freshman year, I couldn’t even play then. So it’s made a tremendous difference in my game.”

The Gophers lost star safety Antoine Winfield Jr. to the NFL, but their secondary has plenty of returning experience. That includes cornerback Benjamin St-Juste, who tied for the team lead with 10 pass breakups last year. The native of Quebec played his first two seasons for Michigan.