No. 18 Penn St starts string of contenders with No. 18 Iowa 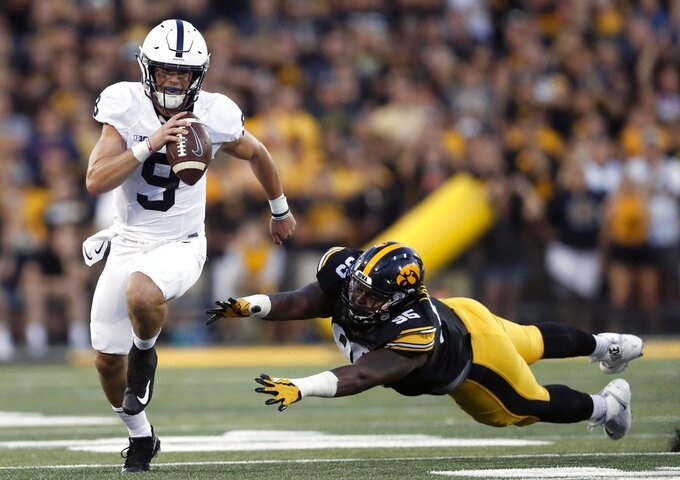 FILE - In this Sept. 23, 2017, file photo, Penn State quarterback Trace McSorley (9) runs with the ball as Iowa defensive lineman Cedrick Lattimore defends during the first half of an NCAA college football game Saturday, in Iowa City, Iowa. The 17th-ranked Nittany Lions begin the three-game gantlet of Iowa (home), Michigan (road) and Wisconsin (home) and will need to keep their offense chugging to get through it. (AP Photo/Jeff Roberson, File)

No. 17 Penn State will have a say in who plays for the Big Ten championship even if it is unlikely to be the Nittany Lions.

No. 18 Iowa (6-1, 3-1) comes to State College, Pennsylvania, on Saturday in the first of three straight games for Penn State (5-2, 2-2) against division contenders. The Hawkeyes are part of a logjam near the top of the Big Ten West standings, with four teams having one loss halfway through the season. They have also become a sneaky playoff contender.

After losses to Ohio State and Michigan State, both at home, Penn State will have a difficult time getting back into the East Division race. But with Iowa, No. 6 Michigan and No. 20 Wisconsin lined up the next three weeks, the Nittany Lions have a chance to play spoiler and make a case to play in a third straight New Year's Six bowl game.

For a program that has been mostly on an upward trajectory since it surged to a Big Ten title in 2016, the next three weeks will determine whether Penn State is in the midst of a small-step-back season. The Nittany Lions have not lost three straight homes games since 2015, when they were still recovering from NCAA sanctions in coach James Franklin's second season.

McSorley and the passing game has lacked consistency, but he senior quarterback has had a bigger role in the running game. McSorley already has rushed for a career-best 565 yards and eight touchdowns.

"Bottom line, he's a winner," Ferentz said. "Every time he's out on the field, they have a good chance to win."

After two straight, 8-5 seasons for Iowa, Ferentz's team is quietly putting together a season reminiscent of 2015, when the Hawkeyes reached the Big Ten championship unbeaten before finishing 12-2.

These Hawkeyes, like those, are tough defensively, led by one of the best defensive lines in the country.

"I think it's by far the best front that we have faced in two years," Franklin said. "They are long. They are physical. They are stout. They make a bunch of plays."

Quarterback Nate Stanley has made these Hawkeyes more dynamic, with 16 touchdown passes, and maybe the best pair of tight ends in college football in Noah Fant and T.J. Hockenson.

"Fant may be the best receiving tight end in the country, and then Hockenson does a really good job, as well," Franklin said. "He's extremely physical. He's nasty but makes a bunch of plays for them and brings the mentality to their offense."

More things to know about Iowa's attempt to break a four-game losing streak in the series against Penn State:

Franklin is worried about leaning too much on McSorley.

"We need more players having a bigger impact on the game on offense," Franklin said.

While McSorley pushed back on that, his workload has increased. The fifth-year senior has averaged 18 carries in each of the last four games and is on pace to throw 98 fourth-quarter passes after dropping back 74 and 76 times in the fourth quarter each of the last two seasons.

The Nittany Lions will have to defend those Iowa tight ends in the first half without starting safety Garrett Taylor, who will sit out after being called for a targeting foul last week against Indiana.

The Nittany Lions played much of last week's game without receiver Juwan Johnson, who was out with an undisclosed injury, but he is expected back this week. Though Johnson is among the veteran receivers who have had problems with drops this season for Penn State. Between the injuries and inconsistent play, there could be an opportunity for some younger players like Jahan Dotson, Cam Sullivan-Brown, and Daniel George to play.

Iowa expects to have linebacker Jack Hockaday (knee) back after he missed the last two games. The senior won't start, but should see time in reserve. Cornerback Matt Hankins (wrist) is more uncertain and could miss is fourth straight game.